International aid agencies have historically been criticized for failing to seek the views of those they are trying to help, providing them assistance without properly consulting or them about what they need or involving them in the crisis response.

In recent years, aid agencies have made many strides in opening up channels of communication, by setting up community radio stations, Facebook pages and newspapers; providing centralised information centres or hotlines during natural disasters; and holding grassroots consultations with communities, all of which provide improved feedback loops and accountability (See IRIN’s in-depth on aid agencies’ accountability to those in need).

The Communicating with Disaster Affected Communities (CDAC) Network – a grouping of humanitarian, media and technology organisations founded in 2009 – has nearly tripled in size in the last three years; and donors have increasingly funded projects aimed at Communicating with Communities – or CwC as it is known.

But while affected communities’ views have become an integral part of emergency response, aid workers say CwC must evolve to keep up with changing trends in both the technology and humanitarian aid sectors.

This month, CDAC hosted its first members’ forum in Geneva, where participants outlined the way forward for CwC. Here are five key take-aways:

It’s not about us; it’s about them

Aid agencies have historically viewed CwC as a way of “managing the us-them relationship”, Imogen Wall, an independent humanitarian communications consultant, told the forum. Rather, she said, aid agencies should concentrate on creating platforms for communities to communicate with each other. For example, in parts of Nepal following this year’s 7.8-magnitude earthquake, aid agencies provided wifi spots so that people could share information with each other, allowing Nepalis to fundraise from the outside world through online networks.

“We tend to judge our value by the relationship between us and the affected communities. But it doesn’t involve us,” Wall said. “If we keep assessing the value of this in terms of our organisations, then we’re going to miss most of the point.”

Giving the example of Iraq, Alexandra Sicotte Levesque, CwC global coordinator for the UN’s emergency aid co-ordination agency, OCHA, said Iraqis knew how to help themselves: “They just needed the communications equipment and access to a connection to get the information they needed to access safety and communicate with their families.”

For Gianluca Bruni, chief of the Emergency Telecommunications Cluster, a network of organisations hosted by the World Food Programme that sets up emergency communications for aid agencies in crisis zones, that’s the next step. ETC’s 2020 strategy includes providing ICTs to affected communities directly, for example by allowing refugees to see what’s happening at the other side of the border.

Members of WFP's Fast Information Technology and Telecommunications Emergency and Support Team (FITTEST) are hired by the UN Country Team in Niger to install a solar-powered security lighting system. WFP has several business units that operate on a cost-r 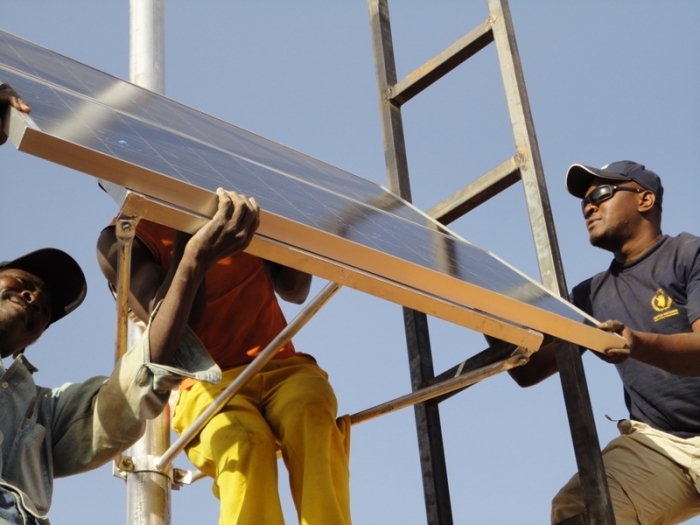 According to veteran aid worker Nigel Fisher, who has led the UN’s humanitarian response in places like Syria, Afghanistan and Haiti, the term ‘Communicating with Communities’ neglects this necessary evolution, implying “a rather traditional view of the world: outsiders looking into communities.

Aid agencies now have a good idea how to communicate with affected communities in the wake of a natural disaster. The earthquake in Nepal has become a showcase for CwC, from Internews’ Open Mic Nepal project to OCHA’s Inter-Agency Common Feedback Project.

But they recognize a gap in communities with communities affected by protracted and complex conflicts – which make up the majority of humanitarian crises today – where local politics and competing interests make the task much more complicated.

“When we talk about communicating in conflict environments, this is a tough reality check,” said Ana de Vega Diez, emergency community-based protection officer for the UN’s refugee agency, UNHCR.

Network connectivity can be unreliable in an evolving conflict situation, and aid agencies do not always have a good grasp of the different local actors, how they are aligned, and the local information “eco-system”. If a radio station is tied to one party to the conflict, for example, should it be used to disseminate information?

What people in conflict situations want to know may also be quite different to those who are affected by an earthquake or flood, with more focus on security.

“Generally speaking, what people want to know is … if their house is safe, if the school where their children are going is safe,” explained de Vega Diez.

“They want info on services too, but they mainly want to communicate with their families… They want to feel connected. When your country is at war, you are isolated. Our support can combat this sense of isolation. This is fundamental.”

Data protection is another consideration. If aid agencies collect sensitive information from communities in conflict zones, they need to be able to protect it from falling into the wrong hands – a life and death issue that the humanitarian community has yet to take seriously, according to Wall.

Social media is not a silver bullet

Social media has been touted as a game-changer in humanitarian response – and particularly in CwC – allowing communities affected by crisis to map incidents and provide critical information to responders. But it can also skew understanding of needs, giving disproportionate awareness to areas or groups with internet access. For Leonard Doyle, spokesperson and head of communications for the International Organization for Migration, social media and new technology are not the panacea they are often seen to be.

In the aftermath of the 2010 earthquake in Haiti, for example, the popular narrative was that SMS messages had saved lives by allowing people caught under the rubble to text their locations to rescuers. But messages sent from under the rubble did not arrive until three or four days later – when it was too late – because mobile networks went down following the quake, Doyle said.

When Typhoon Haiyan hit the Philippines in 2013, social media was hailed as a key part of the response. Of more than 442,000 tweets posted in the first 48 hours after the typhoon, OCHA found 15 percent to be potentially relevant to the humanitarian response. But even so, most of the activity on Twitter, Doyle said, was by aid workers trying to get visibility with donors; not by people in need of help - many of whom weren’t on social media in the first place.

“You have to look really carefully.... There are claims that Twitter was instrumental in self-organizing, but not in our experience – not at all.”

By the time an earthquake hit Nepal in April this year, internet penetration was much higher. Still, many of the tweets and Facebook updates after the earthquake were generated in Kathmandu while problems outside of the capital, where there was no network, weren’t captured. 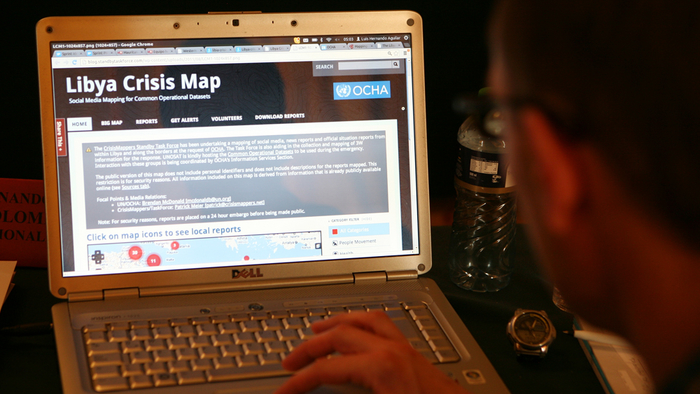 As Brendan McDonald, chief of OCHA’s Resource Mobilization Support Sectio n put it, the challenge for CwC moving forward is to more meaningfully use social media to save lives rather than add to the noise.

And sometimes low-tech solutions are the best answer. One suggestion at the forum was that senior manager spend half a day in the field every week: “If we spent the same time talking to people as we do talking to ourselves in coordination meetings, things would change significantly,” de Vega Diaz said.

Reflecting the industry-wide shift towards a more bottom-up local approach, aid agencies should also tap into communication efforts initiated and managed by communities themselves, not imposed from the outside by international aid agencies.

“We come in thinking we have the answers and solutions,” Jacobo Quintanilla, community engagement adviser at the International Committee of the Red Cross (ICRC), told IRIN. “Where are the local communication ecosystems, the trusted platforms, the local tech groups? We alienate the local tech innovators; we need to embrace them.”

Paul Conneally, head of the corporate communications division at the International Telecommunications Union, the UN’s ICT agency, pointed to the various technology hubs in Africa with whom humanitarian agencies have not bothered partner. “Innovation is happening at the grassroots levels. It’s not being imported from Geneva or New York. That data, the information and analysis has always been there. It’s up to us to plug into it better.”

These discussions are at the centre of the tectonic shifts that are about to take place in the humanitarian world.

For communication to be effective, aid agencies must also invest in understanding the local context and dynamics in advance of a crisis.

“None of us can communicate with communities in a knowledge vacuum,” Fisher said.

While the term ‘preparedness’ has historically been understood to mean building earthquake-resistant buildings or stocking supplies in areas that might be hit by conflict, for Fisher, real preparedness means something “more fundamental”: knowing the context, understanding the local actors, local capabilities, local ways of acting and doing things, as well as understanding the strengths and weaknesses of governments, political and economic, social and community dynamics.

“That level of knowledge and understanding can’t happen just as we’re parachuting into the midst of crisis in chaos with little or no knowledge of the place into which we’re diving.”

And finally, aid workers need to remember why they are communicating in the first place. At a time when at the international emergency aid industry is facing a crisis of legitimacy, CwC is part of a move towards locally-grounded responses.

“The act of communicating isn’t really the end goal,” added Mark Bulpitt, head of humanitarian and resilience at World Vision UK. “It’s a means to an end,” he said. “It’s about addressing the power imbalance” between aid agencies and the people affected by crises.

“These discussions are at the centre of the tectonic shifts that are about to take place in the humanitarian world, where affected communities are better able to help themselves and determine their futures,” Fisher added.

*This article has been corrected. The original erroneously stated that Twitter, rather than SMS messages, was perceived to have saved lives following the earthquake in Haiti. It also indicated that 44,000 tweets were recorded following Typhoon Haiyan in the Philippines. The correct figure is 440,000.