As Malaysian police finish exhuming mass graves in human trafficking camps along the Thai border, Southeast Asian nations are under pressure to end the brutal trade in human lives by tackling the roots of the crisis.

Richard Towle, who represents the UN’s refugee agency, UNHCR, in Malaysia, says the current crisis provides a “unique opportunity” to kick-start diplomatic efforts not only to deal with the trafficking of migrants, but also the underlying problems that prompt many people to leave their homes in the first place.

“Tackling the root causes has to be part of a suite of measures taken, otherwise we’re simply dealing with the symptoms and not the cause,” Towle told IRIN in an interview at the UNHCR compound in Kuala Lumpur.

The majority of the 3,300 migrants who have so far come ashore in Malaysia, Thailand and Indonesia, as well as a further 2,600 thought to still be stranded at sea in boats abandoned by their smugglers and traffickers are Rohingya from Myanmar, a persecuted Muslim minority stripped of citizenship since 1982.

See: All at sea: what lies behind Southeast Asia's migrants crisis?

Tackling the trafficking networks may prove easier than addressing the deep-seated discrimination against the Rohingya in Myanmar that drives them onto the traffickers’ boats.

There are indications the region is finally taking the issue seriously. Since the first boats crammed with starving people were spotted in the Andaman Sea in mid-May, three high-level regional meetings have taken place, including in Bangkok on 29 May. As search-and-rescue efforts to locate the remaining stranded boats continue, Malaysia, which is chairing the Association of Southeast Asian Nations (ASEAN) this year and is President of the UN Security Council this month, has proposed another summit.

“The migrant issue should be resolved at [the] ASEAN level with assistance from other countries and international bodies as needed,” Malaysian Prime Minister Najib Razak told delegates at the Asia Pacific Roundtable in Kuala Lumpur this week. “Only if countries work in unison, can we defeat this trade in human misery.”

Abdul Hamid of the Rohingya Society in Malaysia, a refugee support group, which has more than 10,000 members, welcomed the efforts of ASEAN countries to engage with Myanmar to resolve the crisis, but was doubtful of a positive outcome. “We know they will not listen to ASEAN. They aren’t afraid of ASEAN.”

Nicholas Farrelly, a researcher at the ANU College of Asia and the Pacific in Canberra, describes the situation as a “fiendish challenge.”

“The Rohingya conundrum is not new,” he told IRIN. “It has proved to be a festering wound in the borderlands where northern Rakhine state runs into southeastern Bangladesh. What’s really going to be required is some new compact that, in a genuine and sustainable fashion, seeks to change the equation for the Rohingya both there and elsewhere.”

Three years ago, communal violence in western Rakhine between Buddhists and Muslims, left 200 people dead. Thousands of Rohingya were corralled by the government into squalid camps, where their movements are tightly restricted and they have little access to healthcare and education. Many look to the sea to escape and smugglers, some of whom turn traffickers, have expanded their operations to meet the demand.

UNHCR says 88,000 people, both Rohingya and Bangladeshis, have journeyed across the Bay of Bengal since the beginning of 2014. It estimates about 1,000 people have died on the way. For many, the destination is Malaysia, where tens of thousands of Rohingya live on the margins of society, working illegally and unable to send their children to school.

It was Thailand’s efforts to crack down on the traffickers that caused them to abandon their human cargo at sea and precipitated the current crisis. After initially pushing the boats back, Indonesia and Malaysia finally agreed to let people ashore, on the condition that the new arrivals be resettled in third countries within a year. 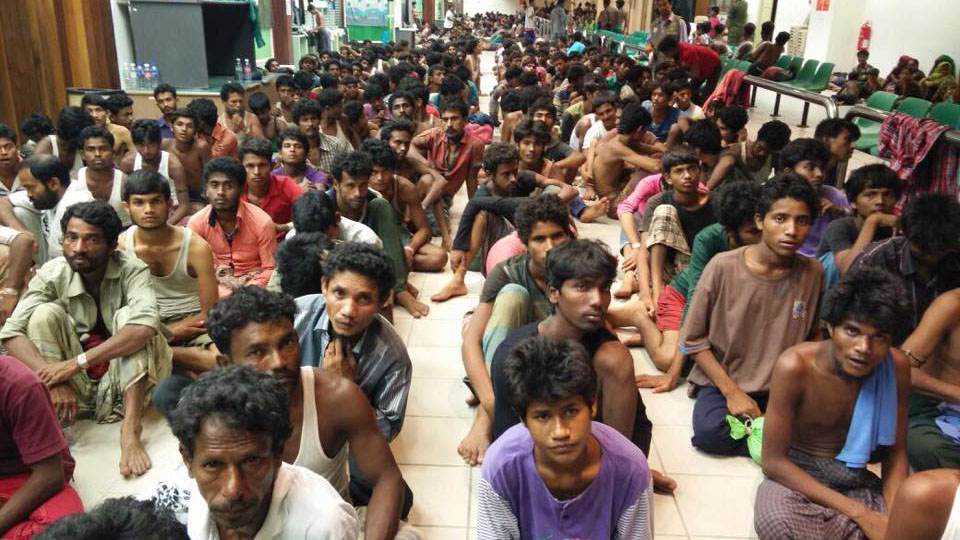 There are already 152,830 refugees and asylum-seekers registered with UNHCR in Malaysia and more than 90 percent are from Myanmar. The United States, which has by far the largest global resettlement programme, is expected to take just 7,500 people of Myanmar origin from Malaysia this year through a process that generally takes at least 18 months.

“Resettlement is not the solution for most refugees,” US Assistant Secretary of State for Population, Refugees and Migration Anne Richard told journalists in Malaysia last week. “It’s really for people for whom there’s no going back. Certainly, it’s not the most important solution; that’s that people should not have to leave their country in the first place.”

The US has been calling on Myanmar to restore citizenship for the Rohingya, and the government in Naypyitaw has repeatedly pointed out that it has launched a citizenship verification programme, which aims to grant citizenship to those Rohingya who qualify. But the programme has had little success so far and faces resistance from within the Rohingya community and without. Nationalist ethnic Rakhine Buddhists oppose the programme while many Rohingya refuse to participate in it because it requires them to list their identities as 'Bengali', which implies they are from Bangladesh.

Although Myanmar attended the regional summit in Bangkok last Friday, the official statement from the meeting failed to mention the Rohingya, as did a list of proposals for action released by UNHCR in conjunction with the International Organization for Migration and the UN Office on Drugs and Crime, fuelling criticism among civil society. But those who’ve participated in such negotiations insist ASEAN can influence Myanmar.

“We have had discussions within ASEAN on democratisation and opening up [with Myanmar] for many years,” former Indonesian foreign minister Hassan Wirajuda said in an interview with IRIN. “You may not realise it, but quite often we have had quite heated debates.”

The region has absorbed far larger numbers of refugees in the past, such as the Vietnamese boat people and those displaced by the war in Cambodia. Malaysia also hosted thousands of Indonesians from Aceh during the decades-long conflict in the Indonesian province, and, after the 2004 tsunami, temporarily gave them the right to work.

UNHCR is hoping for a similar dispensation for the thousands of Rohingya who are likely to remain in Malaysia in the long term.

“It’s a win-win-win,” Towle explained. “It’s a win for people to be able to live here legally. It takes them away from agents and exploitative employers. It’s a win for employers to have a lawful population who are here anyway and, from the government point of view, it flushes people into the daylight and allows them to tackle issues around criminality in a more complete way. The alternative is to leave people in the black economy, unregistered and unknown.”