As political and business leaders flocked to the World Economic Forum on Latin America on Mexico's palm-fringed Riviera Maya last week, military police were busy defending the country's second city from a drug gang that had just brought down an army helicopter with a rocket-propelled grenade.

In addition to the unprecedented RPG attack, the Jalisco New Generation (JNG) cartel, which has only been in existence for five years, killed 15 people, including a public official and six soldiers, and set ablaze 11 banks and five gasoline stations around Guadalajara.

From the privileged setting of the WEF talks, which took place at well-protected beach resorts along Mexico’s Caribbean coast from Wednesday to Friday, the crime rocking Latin American cities can seem like a remote problem.

The impact and consequences are no different than a large-scale conflict.

But unrivalled urban growth and the new challenges associated with the rampant violence in these modernising metropolises are making the issue increasingly hard for Latin America’s leaders to ignore.

A variety of WEF seminars and workshops focused on the inter-related problems of political corruption and crime in Latin America. Panel discussions included speakers from prominent international humanitarian organisations and human rights groups, highlighting the growing role played by humanitarians in the region.

During a session on restoring public trust in Latin America’s institutions, Amnesty International Secretary General Salil Shetty told the audience that the region is home to the world’s most violent cities and yet only 24 percent of murders result in convictions.

“In my view, Latin American cities are in a permanent state of low-level war,” Shetty told IRIN on the sidelines of the event. “The impact and consequences are no different than a large-scale conflict.”

Shetty also criticised heavy-handed responses by governments to mass protests, which he said had contributed to urban violence.

“Police and security forces don’t know how to deal with the rise of public protests,” he said, during the panel discussion, referring to recent demonstrations in countries like Brazil, Mexico and Venezuela. “They are used to dealing with narco-gangs [Latin America’s drug cartels] and the response is almost the same.”

A sign of growing interest in Latin America and urban violence, Amnesty International opened a regional office in Mexico City at the beginning of May and is also planning to expand to Lima, Peru.

“Mexico is stigmatised by the theme of crime, insecurity and narco-trafficking,” Mexican President Enrique Peña Nieto told the WEF, pointing out that half the population is under the age of 27 and that more young people are joining criminal gangs and committing violent crimes as a result of high unemployment and stark inequalities. 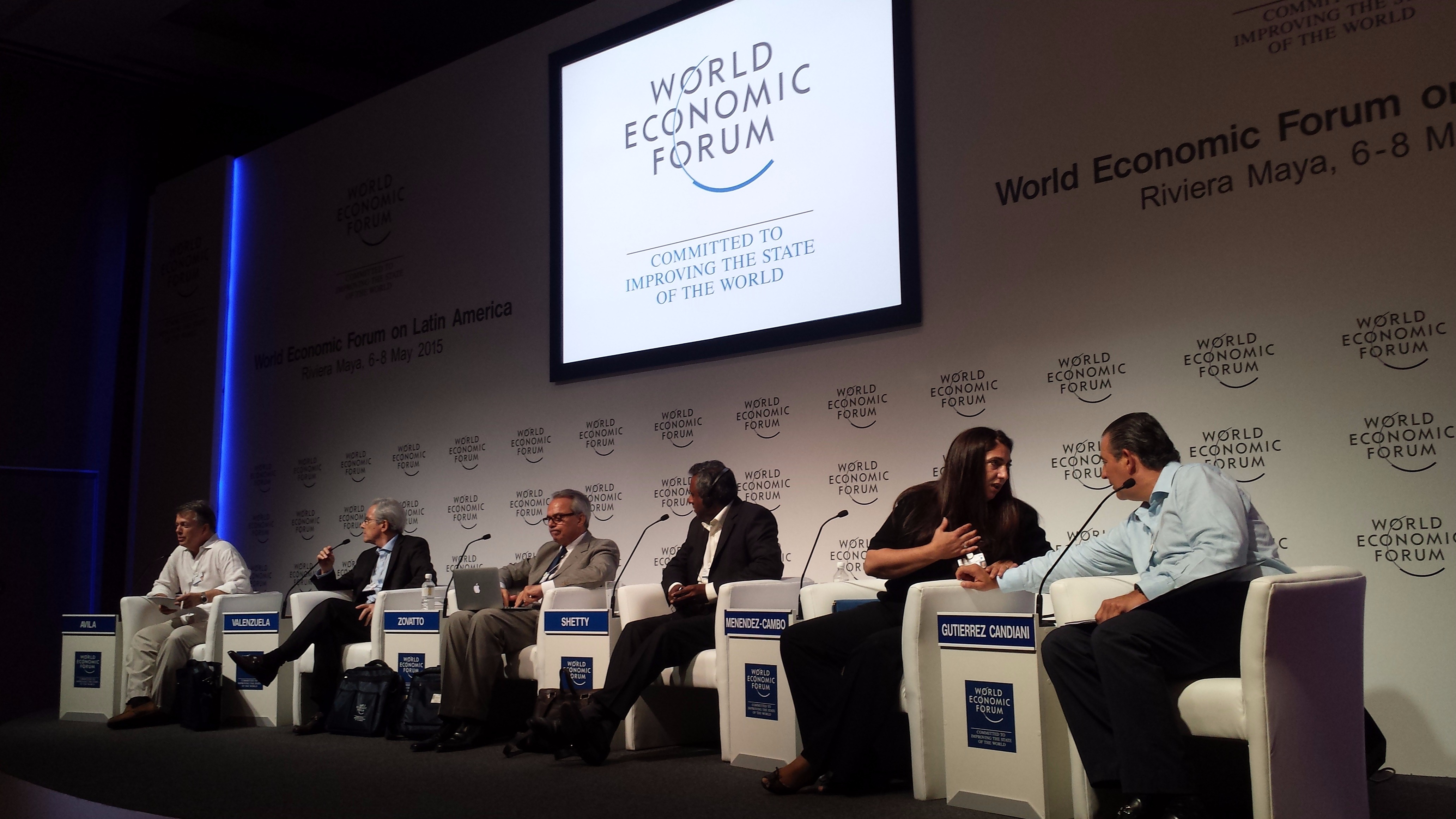 “Young people don’t have the same patience as the older generation, so there is greater anger and greater expectation,” Shetty noted.

Aníbal Gaviria, mayor of Colombia’s second largest city Medellín, told the gathering how recovering public spaces by building parks and modernising the transport system had turned things around in what had been one of Latin America’s major drug-trafficking hubs.

Once home to infamous drug baron Pablo Escobar, Medellín has made huge strides in public security over the past two decades, with the homicide rate dropping almost 80 percent. Gaviria attributed this success to investment in integrating the poorer outskirts of Medellín with the wealthier centre.

In 2004, Medellín installed the world’s first Cable Propelled Transit (CPT) system, known as the “metrocable,” allowing poor residents in hillside slums to travel to schools and work in downtown areas without a lengthy commute through gang territory. A new tram system is also due to be installed in September.

“One of the main problems in Latin America is inequality. So, to counteract this, we have sought to promote equality in public spaces,” Gaviria said. “The new transport system in Medellín is safe and cheap, and we have brought public order to very far away places where it had been absent.”

The role of new technologies was also a constant theme in the WEF talks, with a number of speakers underlining how social media networks and Internet applications could be used both to contribute to violent crime and to help combat it.

One participant cited the rise of Facebook-orchestrated kidnappings in Venezuela, with perpetrators using the social media network not only to track down victims but also as the forum for posting their ransom messages to family members.

Others trumpeted the use of technology to tackle public insecurity through data collection of criminal activity and mapping of crime hotspots.

Robert Muggah of the Igarapé Institute announced the launch of the Homicide Monitor, a new Internet application designed to track murder around the world.

See: Beyond the body counts: Why murder rates matter to humanitarians

Yet, at the same time that international organisations are becoming increasingly involved in Latin America’s urban conflicts, the shift also brings a fresh set of challenges.

Civil society, including humanitarian organisations and universities, will play a very important role.

Governments tend to be “distrustful” of civil society groups and vice-versa, said Duncan Wood, director of the Woodrow Wilson Center's Mexico Institute. “One of the biggest barriers to get these institutions to work together is levels of trust,” Wood told IRIN. “It’s a highly conflictual relationship.”

According to Wood, the rise of urban violence in some of the region’s most important economic arteries requires new levels of coordination between different actors, with the crisis in Guadalajara providing something of a litmus test.

“Guadalajara is going to be a very interesting test case of Mexican society’s capacity for recovery after an outbreak of violence,” said Wood, who noted that other impoverished and violence-prone cities in western Mexico and along its border with the United States have fewer economic advantages.

“It’s going to take very strong action by the federal authorities and a lot of coordination at the different levels of government for Guadalajara to bounce back, but civil society, including humanitarian organisations and universities, will play a very important role in this.”