A truck carrying vital medicines to a remote refugee camp near Mauritania’s border with Mali overturns during its 2,000 kilometre journey through the Sahara desert. It is the rainy season and half the consignment is damaged by mud and no longer usable.

Incidents like this one are rare but calamitous when you consider it can take up to six months to deliver essential drugs to refugees and internally displaced people in far-flung parts of the globe.

IRIN has delved into the supply chains used by Mé

Join us on the time-consuming and perilous journey many drugs have to make before they reach those most in need and can begin to save lives.

Wrapped up in red tape

“You have countries where it’s quite simple to import, others where it’s almost impossible; then those in between that are quite demanding in terms of requirements. They ask for a lot of certificates and proof of quality and sourcing,” said Pennie Verseau, who heads MSF’s supply department in Paris.

Countries such as Ethiopia and Uganda require Good Manufacturing Practice (GMP) certificates for each imported medicine. “An annual order will have up to 200 different items meaning the suppliers would have to provide [GMP certificates] for them all,” said Heiko Hering, senior public health officer with UNHCR in Geneva.

Such requirements are usually eased during emergencies and are generally welcomed as a sign that a government is committed to preventing counterfeit drugs entering the country, but the process is often incredibly laborious.

“If you’re well organised and know what they need, it’s okay,” said Verseau. “The problem is when the regulation changes and they put a new constraint and then we have to go back to the supplier.”

Such a problem delayed a full order of MSF medicines at the border of one African country, which Verseau declined to name, for more than a year.

“The direct consequences are that you have shortages in stock and then we have to try to find an alternative, which isn’t always possible,” she told IRIN.

Buying drugs locally would save considerable time and red tape, but that is rarely an option. Most countries lack the domestic manufacturing capacity and, where there is a local drug market, it is difficult to ensure quality.

Except in the case of a small number of mainly Middle Eastern countries, such as Jordan, where there is a ban on the import of medicines and drugs have to be bought locally, aid agencies rely on international suppliers who source their drugs from manufacturers that can certify the quality of their products.

Currently, most aid agencies only buy medicines from manufacturers who can produce GMP certificates proving their products have been quality checked by the World Health Organization (WHO) in conjunction with national drug authorities.

“Before, our policy was always to rely mostly on international suppliers because of the costs, but five years ago we made a policy that drugs must be procured internationally, primarily for the reason of controlling quality, and that has become accepted practice with most international actors,” said Hering of UNHCR.

Not all manufacturers follow GMP practice and a recent article in The Pharmaceutical Journal argues for a global system to ensure a quality of drugs similar to WHO’s limited prequalification list.

Most aid agencies order medicines from suppliers who take up to two months to source the drugs from manufacturers. MSF saves time by having its own supply centre based in Bordeaux, France.

The centre’s 13,000 square metre warehouse is stocked with all the medicines that MSF needs for its programmes as well as emergency items that can be quickly deployed in the event of a disaster or disease outbreak.

Once an order is ready to go, aid agencies must weigh up the reduced cost of shipping it to the nearest port versus the much quicker but more expensive option of sending it by air. MSF sends most of its medicines by air.

According to Verseau, this is partly to lower the risk of them being damaged.

“Containers need to be temperature and humidity controlled, which is not a problem on a boat, but at the port sometimes you don’t know what condition it’s being kept in; you might just have to throw them away if they’ve been sitting in a container under the sun.” 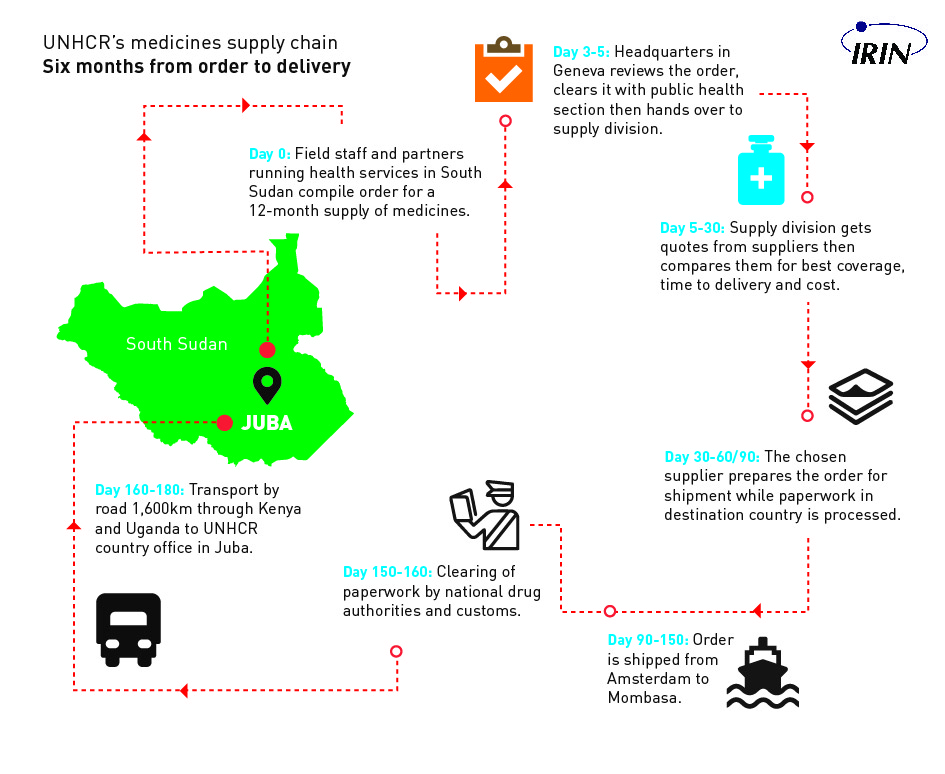 UNHCR, which prepares orders large enough to cover a whole year of operations in a particular country, ships most of its medicines and must then transport them by truck to warehouses in the destination country.

For land-locked countries like South Sudan and the Central African Republic (CAR), this usually involves covering thousands of kilometres by road. Such journeys are fraught with risk.

The final leg of the supply chain – getting medicines from centrally-based warehouses to clinics and camps in conflict-riven states with poor or non-existent roads – often presents the greatest hurdles.
In South Sudan, for example, paved roads are scarce and the rainy season makes unpaved roads impassable from May to December. Even during the brief dry season, the ongoing conflict has made some roads unsafe to travel.

“The main means of transport is by plane,” said Karin Ekholm, who works for MSF in South Sudan. “Everything has to be flown in for 10 months of the year.”

But transporting medicines by plane is too costly for many NGOs.

In the CAR, for example, the International Federation of the Red Cross and Red Crescent Societies (IFRC) does not have sufficient funding to air deliver medical supplies.

An initiative to combat malaria that IFRC is implementing with a grant from the Global Fund aims to provide close to 850,000 people displaced by the current conflict with mosquito nets, malaria treatment and rapid testing kits. But the combination of poorly maintained roads and an unpredictable conflict have made the task extremely challenging.

Trucks carrying medical and other supplies travel in convoy with heavy security but are still sometimes targeted and attacked, according to Nelly Muluka, who is based in IFRC’s office in CAR's capital Bangui.

“Some of the roads are in a bad state, and some are just inaccessible. We’ve had to use boats before, motorbikes, even walking,” she said.