The aid response in the western Burmese state has been tricky since two bouts of communal violence between Rakhine Buddhists and the minority Rohingya Muslims in June and October 2012 resulted in more than 140,000 people - mostly Rohingyas - being forced to flee to camps for internally displaced persons (IDPs).

The number of IDPs in camps is the same as it was a year ago, and hundreds of thousands more outside the camps are in need of humanitarian assistance as the state's economy suffers from what the International Committee of the Red Cross (ICRC) called "the long-term effects of violence".

In February 2014, the government expelled Médecins Sans Frontières (MSF), the largest non-governmental medical provider in the state, over perceived bias toward Rohingyas, who are stateless in the eyes of Burmese law and often dubbed "illegal immigrants" from neighbouring Bangladesh. A month later, international aid workers fled after mobs targeted their offices. Operations have gradually recovered since then, though MSF effectively remains banned.

Signs of discontentment appeared early. A September 2013 OCHA bulletin noted that "growing community resistance about the perceived bias of assistance. as well as persistent threats and intimidation of staff has created an increasingly menacing atmosphere."

That same month, Refugees International, a Washington-based advocacy group noted that "bureaucratic impediments and threats by some Rakhine community leaders certainly hinder aid delivery," and an International Crisis Group analyst warned: "Without addressing the very real perception among the Rakhine population that assistance has been disproportionately provided to Rohingya, it will be difficult for humanitarian aid groups to decrease tension."

"In many humanitarian operations, it's only necessary to communicate with the government," Amy Martin, OCHA's Rakhine coordinator, told IRIN. "But the situation in Rakhine has become such that humanitarian actors need to make it clear to a wide range of people exactly what we're doing and why - and we have to do it over and over again to make it abundantly clear that we assess needs based on needs alone."

Bibi Adna, a 20-year-old with a three-year-old son, lives at the Say Tha Mar Gyi Rohingya camp near Sittwe, Rakhine State's capital. She miscarried in July, when she was five months pregnant, causing severe bleeding and pain.

"I miscarried 17 days ago and I still haven't been to see a doctor," she said. "We can't afford the car and the bribe money to pay the guards to let us out of the camp so we can get to Sittwe Hospital."

A mobile medical team had visited the camp five days earlier on its usual rotating schedule. However, Adna said, they had only stayed in the camp for a few hours and she was not aware of their presence until after they had left.

Adna's struggles to access life-saving medical care are not unique. According to a July 2014 OCHA bulletin, "the Suspension of MSF-Holland 's activities and the disruption of aid operations following the attacks on the premises of UN Agencies and INGOs In March 2014 have seriously affected access to vital healthcare and other basic services for displaced people and vulnerable communities."

Seventeen-year-old Shamshida Begum, who lives in Baw Du Pha camp, was diagnosed with tuberculosis at an MSF-run clinic in December 2013 and started on treatment. But when MSF was forced out in February, she was compelled to go to a government-run clinic at the nearby Dar Paign camp.

"Last time we went to the Dar Paign clinic, they gave us a box for a specimen but she has no sputum. She needed an X-ray so we requested that they transfer her to Sittwe Hospital but they refused," Noor Jahan, Begum's mother, told IRIN. Sittwe Hospital, supported by ICRC, is the only referral centre in the state.

Jahan said the government doctors, who are mostly ethnic Burman, the nation's majority, sometimes asked for bribes or harassed her and her daughter because they are Rohingya,who have been subjected to decades of state and communal persecution.

Sittwe Hospital, the only referral centre in Myanmar's Rakhine State, is out of reach for many IDPs in the camps. 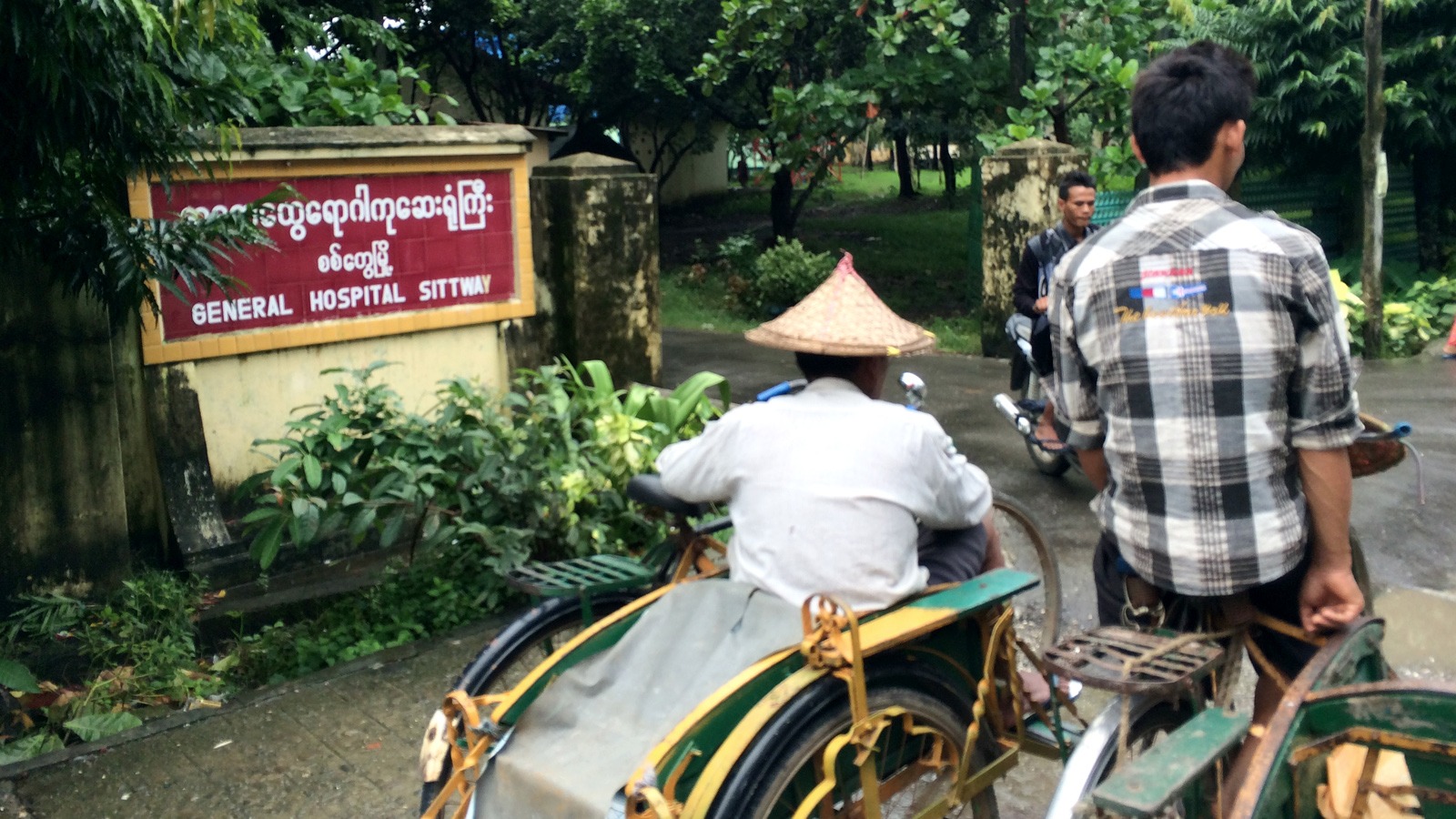 "The harassment is too much," she said. "When we first went to the government clinic, I showed them the MSF treatment tracking book. They threw it on the floor - they said it came from foreigners so they would not follow it."

"Buddhist monks are preaching that international agencies are only helping kalaas," said Ubadjo, a Rohingya former school headmaster who lives in Dar Paign camp. Kalaa is a derogatory Burmese term for foreigners. "For them they see it as light-skinned kalaas, the aid workers, helping dark-skinned kalaas, the Rohingyas."

Buddhist monks hold considerable political stature in Myanmar due to their prominent role in the struggle to regain independence from British colonial rule and in democracy movements.

Today, in an environment ICG has called a "context of rising Burman-Buddhist nationalism" being pushed by a monk-led "populist political force that cloaks itself in religious respectability and moral authority", monastic rhetoric can fan the flames of communal hatred.

In February 2013, MSF said: "Intimidation, and not formal permission for access, is the primary challenge" to delivering aid, explaining that "in pamphlets, letters and Facebook postings, MSF and others have been repeatedly accused by some members of the Rakhine community of having a pro-Rohingya bias."

In the wake of the March 2014 attacks on aid agencies and their subsequent withdrawal, Lilianne Fan, a fellow in the Humanitarian Policy Group at the Overseas Development Institute argued: "This incident reveals the depth of animosity in the state from some communities towards aid agencies [and] demonstrates the failure of the government to guarantee the security of aid workers and to end the culture of impunity towards its citizens responsible for mobilising anti-Rohingya, anti-Muslim and anti-foreign campaigns."

UN and other international agencies have repeatedly called on the central and Rakhine State governments to assure humanitarian access and quell communal tensions. Analysts have criticized the "muted" response, suggesting the government's weak reactions are due to the possible belief that "they could instrumentalise racism and threats of violence from monks and lay supporters."

According to OCHA's Martin, part of the solution is increasing clarity about the work humanitarians are trying to do: "We are trying to more intensely and effectively communicate with all levels of the communities here - the elders, the leaders, and the government."

In late July the government announced MSF would be allowed to resume operations in Rakhine State. The organization responded with "cautious optimism", but to date they have not been allowed to return. In an 8 September statement about negotiating an agreement for re-entry with the Ministry of Health, MSF said they remained "committed to fully develop this agreement and stand ready in cooperation with the MoH to resume operations in Rakhine at any time."

However, substantial uncertainty remains. Said one humanitarian worker who asked not to be named: "It's not entirely clear the government knows what they want to do. But it's clear they can more or less do whatever they want."