Millions of Indonesians who live near the country’s more than 130 active volcanoes are constantly having to decide whether to evacuate or not. Supporting “volcano cultures” with up-to-date evidence and strong leaders is one way to save more lives, say experts.

“Communities balance the risks from the volcanoes with the benefits from living in such a fertile area,” Kate Crowley, the disaster risk reduction adviser for the Catholic Aid Agency for UK and Wales (CAFOD), told IRIN.

According to Crowley and other experts, while some culturally accepted warnings serve to protect communities across the archipelago nation, others - such as the belief that rituals appease the supernatural entities that control eruptions - can also create a false sense of security.

“Communities have their own early warning systems based on tradition and natural signs, and [it can be a struggle for them] to believe scientific monitoring,” said Anat Prag, a supporting officer for Caritas, a humanitarian NGO in Indonesia.

More than 76,000 people fled their homes and more than 200,000 were affected when Mount Kelud on Indonesia’s densely-populated Java island erupted in February, according to the UN Office for the Coordination of Humanitarian Affairs (OCHA). However, some residents insisted on staying behind.

Mount Merapi, between Yogyakarta and Central Java, is Indonesia’s most dangerous volcano, with eruptions every two to three years sending pyroclastic flows - 815 degrees Celsius sulphuric gases mixed with debris - downhill at up to 240km per hour.

More than one million people live within a 10km radius of the summit, putting them at constant risk. Hundreds of lives have been lost due to its eruptions since the 1990s.

But volcanoes also offer a pull factor for farmers. Soil fed by volcanic ash is highly fertile and has attracted settlements on and near the slopes of volcanoes. Pyroclastic flows generally reach 10-15km from the peak; the blasts are most intense within the first 10km.

Merapi’s regular eruptions are a testing ground for humanitarian interventions - including those attempting to balance local knowledge with technical protection measures.

“Belief systems in Merapi have not yet been interpreted for risk reduction. If people don’t understand... what they are being told, and it isn't relevant to them, they won't accept it and they will get killed [by eruptions],” said Crowley. 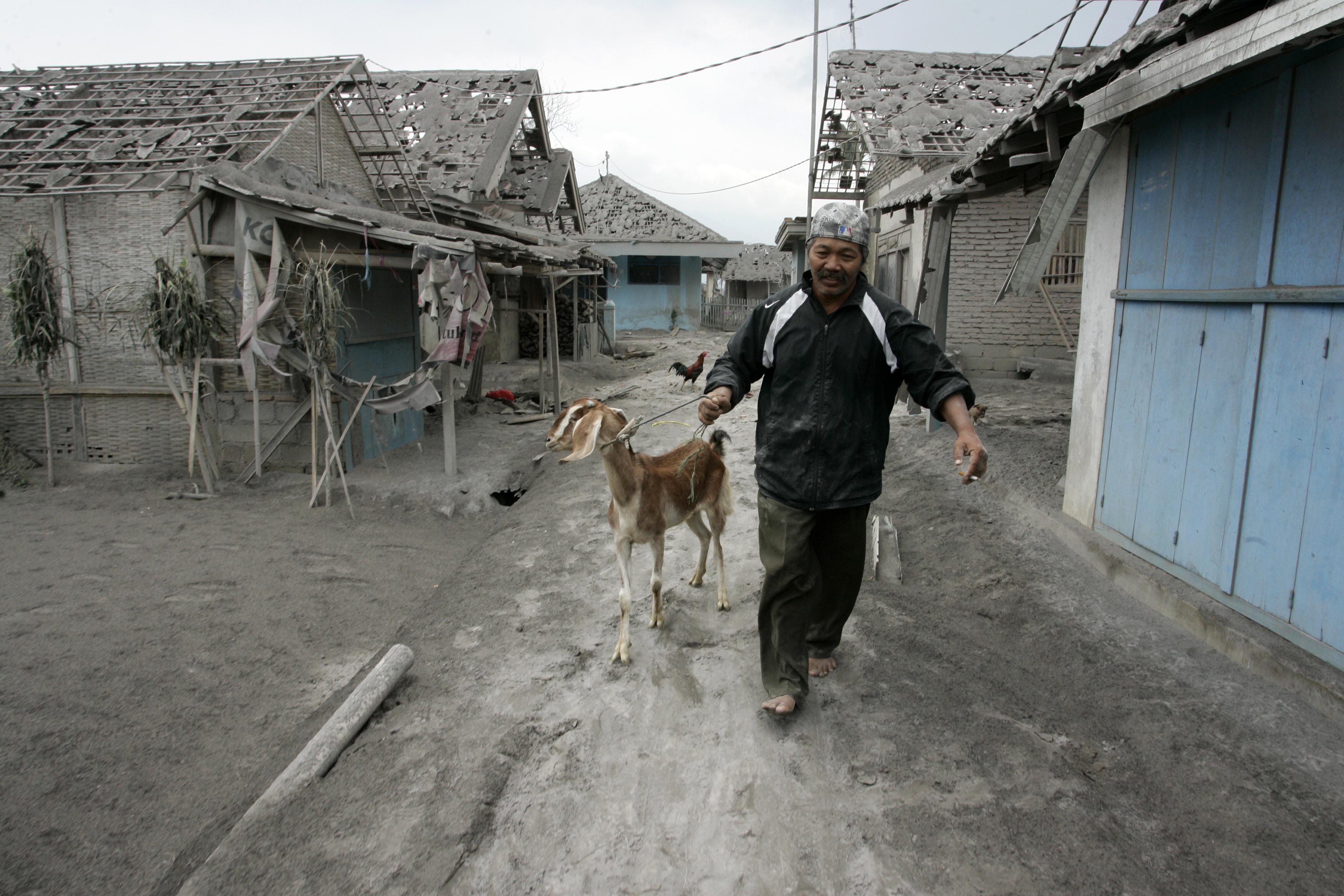 Many communities near Merapi believe supernatural entities - or “creatures” - live at the summit of the volcano and control its behaviour. Other beliefs inspire some to conduct rituals such as burying a severed buffalo head near the summit.

“When people go missing, [others in the community] say the creatures, who in their belief offer protection from eruptions, took them, or that [it is because] they didn't follow the rules or taboos required to make the creatures happy,” explained Crowley, who co-authored a 2012 article which examined local understanding of the Merapi risk, and strategies “produced through hazard experience… [which] can be developed as a coping mechanism for the at-risk communities.”

“The people say `the creatures will protect us.’ It is a coping strategy because they have created rules or taboos from experience or myth to follow so you don't get killed. Some are positive and can save lives, whilst others make people more vulnerable,” she added.

Indigenous warning signs include: Smoke plumes (hot gas clouds from the summit's crater), small earthquakes, the descent of monkeys en masse from the hills, and lightning storms caused by the emission of ash into the atmosphere.

Experts say these represent only some of the signals people need to take seriously in order to stay safe.

For example, in 2006, government officials warned residents of Nargomulyio village, less than 5km from Merapi, to evacuate, as the volcano had reached a Level 5 alert (the highest possible). However, locals refused, citing the lack of signals they were familiar with.

“The residents had such deep spiritual relationships with Merapi that they believed it would provide further natural warnings before a major eruption,” said Caritas’s Prag.

People who live around Merapi are farmers; for many, livestock is their sole asset. Evacuating requires leaving everything they own behind, which they are reluctant to do.

“They are extremely poor people and all they have is land, cattle, and homes,” said Crowley.

“While villagers know with 100 percent certainty that if they evacuate, their land will not be farmed and the cow will not be fed, when and to what extent the volcano will erupt is uncertain [and sometimes not believed] so people are often willing to take that risk,” she added.

“Imagine that your entire bank account is a cow tethered in a shed and if that cow starves to death your entire income is lost.”

Some agencies have begun to address livelihood concerns. “People are worried about their cows - who is feeding [them]. They ask, `will you take responsibility when our cow is dead because we are in the shelter and can’t feed it?’” said Ahmad Husein, spokesperson for the International Federation of the Red Cross and Red Crescent Societies (IFRC) in Indonesia.

He explained that people, after evacuating, often sneak back to their farms while the eruption continues, to feed cows, putting their lives at risk.

To address this dilemma, since 2010 the government has incorporated the evacuation of livestock into the contingency plans of several districts. Cows are transported by truck at the same time as people, according to Iskander Lehman, a Livestock Emergency Guidelines (LEGS) and Sphere humanitarian standards trainer in Indonesia.

“The challenge was finding a suitable evacuation centre for the livestock... [finally] they found out the suitable place - down the hill where the families are,” said Lehman, explaining that the shelters have food and water for the cows, and that families can safely check on them without risking their lives. 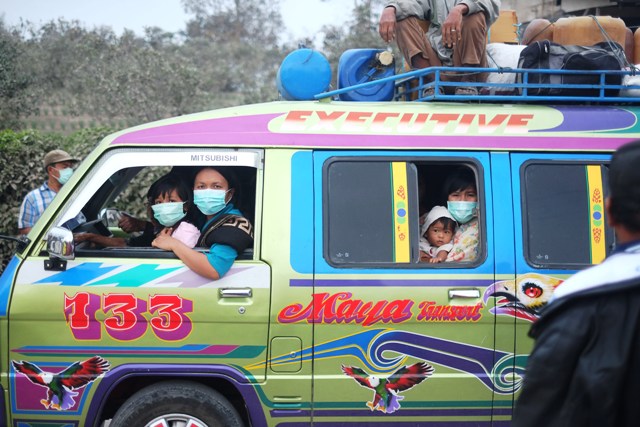 Experts say developing leaders who can motivate people to act is important.

“Despite early warnings having been given to the public, they [sometimes] have confidence that they are safe because traditional leaders or community leaders in the area do not want to evacuate,” explained Nugroho, pointing to a 2010 eruption of Merapi which killed more than 300 people and forced the evacuation of hundreds of thousands.

That year some communities around Merapi had strong faith in Mbah Maridjan, who had been designated the “gatekeeper” of the mountain by the Sultan of Yogyakarta, an influential local religious and political leader. Maridjan refused to evacuate after the eruption, saying he preferred to “die on the volcano”, and influenced dozens of others to do the same, according to local media reports.

The government is trying to combat this by creating “volcano heroes” - leaders whose social position can influence community behaviour.

Bas Surono, head of the Volcanology and Geological Disaster Mitigation Centre at the Energy and Mineral Resources Ministry, is becoming one such influential hero, according to IFRC.

“He spreads information on TV and radio, and the reach is good, with roughly 70 million TV and Internet users in Indonesia,” said Husein, who added that because of Surono's influence, “when the volcanoes start coughing, people [now] start to prepare themselves.”