The shipwreck that claimed the lives of more than 350 mainly Eritrean asylum seekers off the Italian island of Lampedusa last month has focused Europe’s obsession with irregular migration on the area of the Mediterranean separating southern Italy and Malta from North Africa. But this treacherous stretch of sea represents only the final leg of a lengthy journey filled with hazards.

The number of migrants attempting the so-called Central Mediterranean route has doubled in the last year, to over 30,000 by the end of September. The majority of boats now depart from Libya, a country where smugglers operate with relative ease thanks to porous borders and the lack of an effective police force or army under the transitional government.

Coming from the Horn

Syrians fleeing the war in their country make up a significant portion of the current migrant influx, accounting for 7,500 of the 26,100 who arrived in Sicily from Libya by the end of September, according the UN Refugee Agency (UNHCR). But a further 7,500 came from Eritrea and 3,000 from Somalia, compared to 1,890 Eritreans and 3,400 Somalis who used the same route through all of 2012.

Katrine Camilleri of the Jesuit Refugee Service in Malta, a tiny southern European country that has received nearly 1,700 migrants and asylum seekers so far this year, told IRIN that “over the last two years, the proportion of Somalis and Eritreans has increased.”

The question of why more Eritreans and Somalis are trying to reach Europe is one that researchers are only beginning to try to answer, but changes in migration policy in faraway Saudi Arabia and Israel offer some important clues.

Until last year, the majority of migrants and asylum seekers from the Horn of Africa region - which encompasses Somalia, Eritrea, Ethiopia and Djibouti - headed either for the Gulf States by way of Yemen or to Israel by way of Sudan and Egypt.

This year, both of these routes were virtually cut off. Saudi Arabia has resumed construction of a 1,800km fence along its border with Yemen and deported thousands of undocumented migrant workers. According to Chris Horwood of the Nairobi-based Regional Mixed Migration Secretariat (RMMS), Saudi Arabia’s border with Yemen is now “completely sealed” and migrants are unable to get through. Although Ethiopians and Somalis continue to arrive in Yemen, their numbers have dropped from over 107,000 in 2012 to 58,000 by the end of September this year.

At the beginning of 2013, Israel completed its own fence along the border with Egypt’s Sinai Peninsula, shortly after a law allowing it to detain so-called “infiltrators” for up to three years came into effect. Prior to these measures, around 1,000 asylum seekers, mainly from Eritrea and Sudan, were reaching Israel every month. By contrast, during the first nine months of 2013, only 36 individuals crossed the border, according to UNHCR Tel-Aviv.

“It would make sense that two major borders being closed - and the demand from migrants to move being the same as it was - that they will look for alternative routes,” said Horwood.

UNHCR spokesperson Adrian Edwards confirmed that with the Sinai route largely closed off, “people are now shifting towards the Mediterranean, mainly coming into Libya, and from the Libyan coast making their way across to Lampedusa and Sicily.”

Tesfamihret Sheshy*, a 29-year-old Eritrean asylum seeker who spoke to IRIN over the phone from Malta, left his country in February 2012 after being forced to take up a teaching post as part of his national service. He was not trained as a teacher, received no salary and was posted far from his family home. “There was no limit of years you have to be there,” he explained. “You can’t help yourself, your family or the economy of your country.”

After a brief spell at Shagarag refugee camp in eastern Sudan, a “deadly” place where abductions of refugees by human traffickers were a common occurrence, Sheshy paid smugglers to take him to Khartoum, the Sudanese capital. But after a year of dodging authorities and being unable to support himself, he decided to try to reach Europe via Libya. “I knew life there [in Libya] was very difficult, but I had no choice,” he said. “Going out of Eritrea, it’s not like you have a preference [about where you’re going]; you get out of your house because it’s on fire and you’re just looking for people who can welcome you.

After paying another smuggler, Sheshy spent 10 days crossing the Sahara desert with a group of 25 other migrants, all of them Eritrean. “It was very horrible. In the desert, there was no water and the smugglers were threatening us. Fortunately, we survived.”

Some are less fortunate. Recently, the bodies of 92 migrants who had been trying to reach Algeria were found in northern Niger. They had died of thirst after the two trucks carrying them broke down and their smugglers abandoned them.

After entering Libya and being detained by a militia in Benghazi for several days, Sheshy escaped and made his way to Tripoli, the capital. There, he contacted a Libyan smuggler who promised to transport him to Europe. Instead, the man locked him in a warehouse with 300 other migrants. He remained there for two months before his relatives could send the US$1,600 that the smuggler demanded for his release and passage to Europe.

Melissa Phillips, a senior programme officer with the Danish Refugee Council in Tripoli, said that the absence of international or government agencies in southern Libya has made it impossible to track the numbers of migrants entering the country. “The only thing we have at the moment is the number of boats departing from Libya,” she told IRIN. 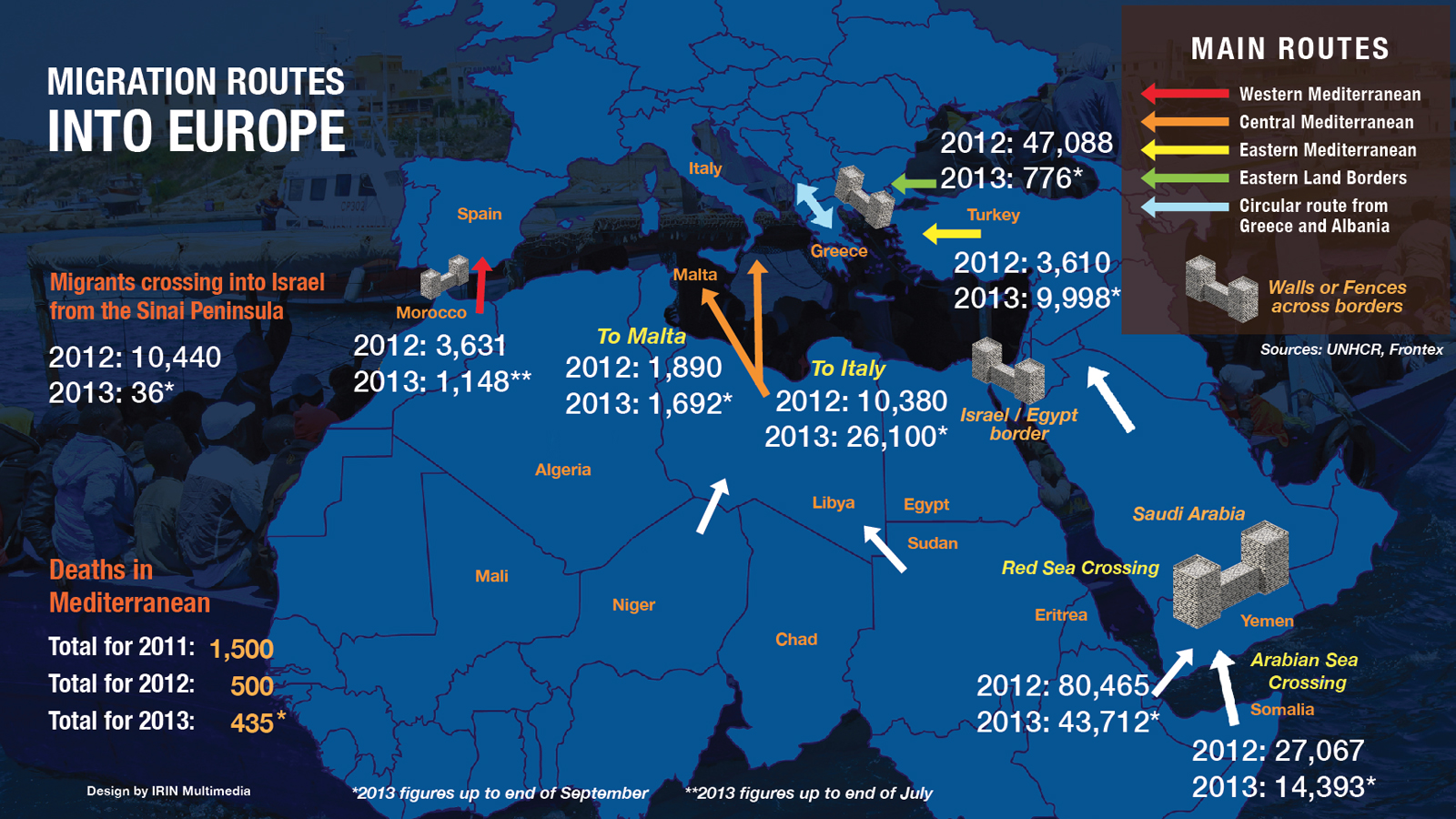 According to UNHCR, 4,619 migrants left Libya for Europe in September alone, compared to 775 during the same month last year.

Phillips added that Libya has long been a destination for economic migrants from sub-Saharan Africa looking for work. But for asylum seekers looking for protection, Libya’s lack of a refugee law and practice of detaining migrants means it is rarely a final destination. “Those groups [transiting through Libya] would include Eritreans, Somalis, some Ethiopians and Syrians,” she said.

Fearing arrest, smugglers rarely accompany migrants on sea crossings, despite charging upwards of $1,500 for passage on over-crowded, often unseaworthy, vessels. “Someone is given instructions on how to navigate. People will call that person the captain, but that person is a fellow migrant who’s suddenly been given a GPS [global positioning system],” explained Phillips. “If anything adverse happens [at sea], they will go off course.”

This was the experience of Ahmed Omar Isaak, a 31-year-old Somali refugee who also described his journey to IRIN over the phone from Malta. “We were 55 Somalis in one inflatable boat. They just gave us a compass and a GPS and told us which direction to go, and then they put us in the sea and told us to go,” he said.

Sheshy travelled with 300 others in a fishing boat that broke down after three days at sea with no food or water. They were rescued by Italian and Maltese coast guards and taken to Malta, where Sheshy has spent the past three months in a refugee reception centre while his asylum application is processed.

“Playing into the hands of human traffickers”

The Danish Refugee Council and RMMS are about to embark on a study that will look at migration flows from the Horn of Africa, through Sudan to Libya, and onward to Europe. The research aims to learn more about the routes and methods of travel this group of migrants and asylum seekers are using and the dangers they face along the way.

What is already clear, however, is that making it more difficult for asylum seekers to use one route to safety merely forces them to use other, often more dangerous, routes. Similar patterns are playing out all over the world, but particularly on the frontiers of Europe, where increasing numbers of migrants and asylum seekers are now entering the European Union via Bulgaria and other Balkan countries, following increased border controls in Greece, previously the most popular entry point.

“It’s like squeezing a balloon,” said Edwards of UNHCR. “The problem pops up somewhere else, and that’s exactly why we’ve been arguing strongly that you can only really work to reduce the toll in lives if you approach it holistically. If you approach it from a deterrent point of view, you’re playing into the hands of human traffickers.”

Phillips of the Danish Refugee Council pointed out that not only do deterrents like fences shift the routes taken by migrants, they also set precedent for transit countries like Libya that are looking for examples to model their migration policies on.

“It’s not just Israel and Saudi Arabia. It’s the actions of European countries, who are talking about greater use of sea patrols and Frontex [the EU’s border security agency] but not about how [they] can share this responsibility. So there are very few good examples that Libya can look to about how to manage this.”

*not his real name