Increased attention to the delivery of HIV prevention and treatment programmes is needed to prepare communities for a potential roll-out of a vaccine, which will most probably be partially-effective, experts say.

In 2009 the results from a six-year trial in Thailand of a vaccine called RV144 showed, for the first time, that a vaccine can provide some protection against HIV infection.

Proven to be 31 percent effective, however, it also raised questions about how a partially-effective vaccine could contribute to HIV prevention.

“I think we have seen modelling potential vaccines take us as far as we can get until we have more data points about how a vaccine is going to operate - making concrete some of the assumptions such as efficacy, and how we would deliver it programmatically,” Warren said.

According to the Joint UN Programme on AIDS (UNAIDS), about 2.5 million people are infected with HIV annually. Developing a vaccine against HIV has been an elusive goal, since the discovery of the virus more than three decades ago.

While waiting on a vaccine…

“Vaccines are not part of the 2013 guidelines from the World Health Organization (WHO) on [HIV] treatment access because it is not possible to establish guidelines for products unless they have been qualified for use. To date there is no vaccine which is considered safe and effective,” a spokesperson for UNAIDS e-mailed IRIN from Geneva, adding that the agency supports efforts to find such a vaccine.

While it remains unclear when - or if - a vaccine will be approved for HIV/AIDS, experts agree the success of the roll-out depends largely on work that must begin now. There are currently 35 ongoing AIDS vaccine trials internationally.

The scale-up of HIV-testing programmes will be crucial, as will close monitoring of logistical issues surrounding vaccine delivery, they say.

“If we have a vaccine of moderate efficacy, say 50-70 percent, I think we should still use it. But we must not create a false sense of security,” Michael Merson, director of the Global Health Institute at Duke University in the US state of North Carolina, told IRIN.

“The conversation we should be having right now definitely should include a prospective vaccine, but it should be grounded in a comprehensive understanding of which interventions work best to prevent HIV in different populations,” he said.

Learning from other vaccines

According to WHO, while there are many guidelines on vaccine implementation, none specifically address partially effective vaccines. Experts say there are a range of factors that must be considered, and that some of them are already addressed in public health interventions.

“There are some basic issues about the vaccine that will determine the specifics of its roll-out,” said Duke’s Merson. “What are the features of the vaccine? Are we talking about an oral vaccine? An injectable vaccine? What age group is it going to be given to? And how often does it have to be given?” he asked, noting the answers have implications for cost and public education.

According to Warren, officials can learn from ongoing dissemination of the human papilloma virus (HPV) vaccine, he said.

“Not only is it a great, highly-effective vaccine, but it also is our first great example of a vaccine that we need to deliver to young men and women,” Warren said, adding that adolescents will also be a likely target group for an AIDS vaccine.

Concerns about consent, the vaccinated feeling more emboldened to engage in risky sexual behaviours, and parental resistance to having their children vaccinated, should not be dismissed, he added.

"Once you make people aware of the vaccine and create the operational system, you must ensure a supply of vaccine"

“If we focus on the HPV vaccine as the bedrock, whenever we do get the AIDS vaccine it can be built into what we know from the HPV experience,” he said, echoing claims by a group of scientists who examined potential lessons from other vaccines for HIV.

“Failure to do so could create a sense of distrust in the health care system and discourage the population from taking other vaccines or seeking health care in general.”

“Countries like Nepal have a strong development infrastructure in terms of agencies and projects ongoing in-country,” Kc told IRIN, saying this can be a strength or weakness depending on how the agencies’ reach and influence are leveraged.

“Educating people who need the vaccine is part of it, but educating development agencies about how to work in each country is another part of it. We can’t just assume the agencies know what they’re doing with an AIDS vaccine because they know experiences in another country or for another vaccine,” he said, reinforcing the UNAIDS and WHO call, first made in 2002, but still relevant now, to educate policy-makers with accurate scientific facts about an HIV vaccine as early as possible in the roll-out process.

While waiting on a vaccine, there are other proven prevention methods, activists emphasize. 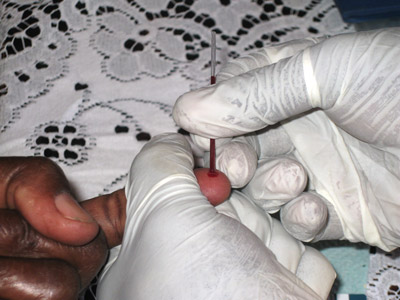 “We need to not wait until we have a vaccine. It is not magic. It’s not going to appear in people’s arms because they’re at risk of HIV,” Warren told IRIN.

“Some people say a vaccine is the only way to end the epidemic. A vaccine doesn’t end an epidemic if people don’t come in to get tested, so there are a series of issues we need to overcome now,” he said.

Modelling of a partially-effective HIV vaccine at 30 percent and 60 percent coverage of the men who have sex with men (MSM) in one part of Australia showed modest results, reducing incidence rate (newly diagnosed cases) by a maximum of 23 percent over 10 years. The authors recommended in 2011 that a partially-effective vaccine be “supplemented with other biomedical and educational strategies”.

But research published in 2008 also warned that uptake of standard vaccines (including measles, mumps, and rubella) among populations most affected by HIV in the US was among the lowest nationwide, suggesting it may be difficult to encourage vaccination among the people who most need it, given the stigma of people infected with HIV.

According to experts, this challenge highlights the need for better delivery methods, a scale-up current successful interventions, and improving what Warren calls “the science of delivery”.

“To think about delivery the day after a product is proven is too late,” Warren told IRIN.

According to UNAIDS and WHO, the efficacy of a first generation HIV vaccine may be moderate. However the overall public health efficacy may be higher when combined with other forms of prevention.

Warren agreed that the silos of HIV prevention must be broken.

“If there is a vaccine that works, say, 60 or 70 percent, I think we would be comfortable with it once it got all the international approval,” said Kc of Nepal’s NCASC. “But I would ask the key affected populations their views on implementation design first.”

Many HIV prevention advocates agree, saying that communities who carry the heaviest burden of HIV risk and infection should be at the core of policy and programme delivery decisions.

Economic projections have shown that focusing on “key affected populations”, including MSM, people who inject drugs, and sex workers, can be cost-effective, an important consideration given dwindling HIV/AIDS funding.

And given how much efficacy depends on how much of the population is vaccinated (and who), experts stress the importance of “social research investigating the likely acceptance and response of the introduction of a partially-effective vaccine”.