If you live in South Africa's Eastern Cape province and cannot afford private healthcare, you have probably experienced what activists recently described as a "broken, inhumane and collapsed" health system, where "accountability is nonexistent".

The Eastern Cape Health Crisis Action recently released "Death and Dying in the Eastern Cape", a harrowing report that describes the disintegration of the provincial public health service on which over six million people depend.

The story of Lindeka Gxala, 33, who lost her baby when she was seven months pregnant, is among those in the report. Between February and May, Gxala visited her district clinic six times but only got to see the nurses twice. She eventually went to the Nelson Mandela Academic Hospital in neighbouring Mthatha for help, where she was told her baby was dead.

The nurses forced her to walk around the hospital, bleeding, with the dead foetus hanging from her body. "I tried to tell them that something was coming out of me. They told me to walk around more. I kept telling them about the pain. By then my dead child had come out feet first and the head was stuck inside me... I was still walking around when I collapsed from the pain. The nurses then removed another patient from her bed and put me in the bed."

Eventually the foetus was surgically removed, but Gxala was given no anaesthetic or pain tablets.

In another account, Sister Ethel Mhlekwa, acting Operational Manager at Kotyana clinic, related how her facility was struggling to get basic services such as electricity. The clinic sometimes runs out of water, making it difficult for nurses to wash their hands, give patients water to drink, or keep the facility clean. "We speak about infection control, but speaking is all we can really do. We cannot possibly practice it properly," she said in the report.

The Eastern Cape healthcare system is in such chaos that clinical staff are not appointed or paid on time, some tuberculosis hospitals are without X-ray machines, some clinics have only one blood pressure cuff, and neonatal mortality is the highest in the country.

Parts of the report were removed before publication, after Minister of Health Aaron Motsoaledi expressed discomfort about some of the testimonies from doctors and patients, saying that the extremely detailed medical information breached patient confidentiality.

Within days of the report being published, Motsoaledi dispatched a task team to investigate conditions in the province. He addressed journalists on 19 September and announced measures to address the crisis. He said his department had been aware of the problems in Eastern Cape since an audit of 4,200 health facilities in 2011, and the work of rebuilding the health department in the province had been going on for some time.

Lindeka Gxala lost her baby when she was seven months pregnant 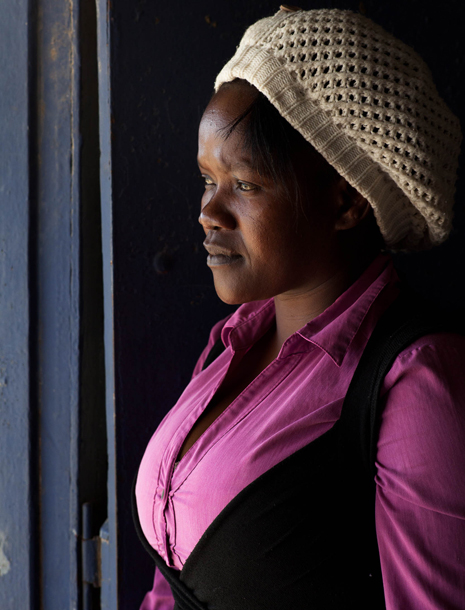 Improving the infrastructure is at the top of his list. More than 1 billion rands [$100million] have been budgeted for the maintenance and refurbishment of hospitals in the 2013/14 financial year. The health department will be implementing 287 projects covering new additions, upgrades, renovation and maintenance works at 132 facilities, including 106 primary healthcare clinics and 8 nursing colleges. In addition, about 100 ambulances have been ordered for the province.

The task team was sent specifically to Holy Cross Hospital, near the town of Flagstaff, after the minister read the story of Dingeman Rijken, a doctor at the hospital who was suspended by the provincial health department for speaking out when Baby Ikho died because the hospital manager had failed to order sufficient oxygen supplies. The team found that the hospital's maternity ward did not even have the basic equipment needed for patient care.

There were no blood pressure machines, so the midwives had contributed R17 ($2) each from their own pockets to buy one machine. The facility had no foetal heart monitors or a glucometer to monitor blood sugar; there were no baby warmers on the resuscitators, and babies were being resuscitated in cold rooms because there were no heaters.

Motsoaledi reinstated Rijken, and ordered that the CEO and the Nursing Manager be suspended with immediate effect, "pending a full investigation into [their] role in respect of serious dereliction of duty, mismanagement and harm to patient care".

"It will not be fair for me only to take action in order for people to take accountability, without attempting to help the patients who use these facilities," he said. Equipment has been sent to the hospital, including 20 blood pressure monitors, 5,000 disposable thermometers, suction machines, and 10 foetoscopes -stethoscopes to listen to foetal heart beats.

According to Motsoaledi, as of August 2013 the Eastern Cape had a backlog of 2,581 wheelchairs and other assistive devices like hearing aids, prostheses and cochlear implants. The health department will step in and purchase the equipment, estimated at R15.3 million. (US$1.5 million).

How did this happen?

Understanding why healthcare in the province is in such a mess requires a geography and history lesson. In 1994 the country’s four original provinces were split into nine. The Cape became the Northern, Eastern and Western Cape provinces. The eastern half of Eastern Cape had consisted of two former homelands - Transkei and Ciskei - while the western half had been part of the former Cape Provincial Administration of white apartheid South Africa.

When Dr Trudy Thomas was appointed as provincial health minister in 1994, healthcare expenditure was at R250 ($25) per person in the previously white part of Eastern Cape, R70 ($7) in the former Ciskei, and "a paltry R40" ($4) in the Transkei. An investigation at the time found that health services in the (mostly white) western part of the province were good to excellent, but the Transkei health system was crumbling. Health facilities were in poor condition, they lacked adequate services and supplies, and faced critical staff shortages.

Almost 20 years later little seems to have changed. In 2012, the OR Tambo district of Eastern Cape (former Transkei) was ranked last of the country's 52 districts when measured against a set of indicators contained in the Health System Trust District Barometer.

It has the worst rate of newborn deaths: 20.8 babies per 1,000 births, or double the 10.2 deaths per 1,000 births of the national average. Almost triple the number of children under five died in the district's facilities, compared to the national average (11.4 percent), while it had the third-highest number of deaths among children less than a year old.

Motsoaledi said it was no surprise that "90 percent of this document titled 'Death and Dying in the Eastern Cape' is about the OR Tambo District. We have also arrived at the same conclusion."

In 1997, Thomas tabulated the backlog of service and infrastructure needed by the health department in a report, and concluded that an extra R500 million [$50million] annually for five years - "under a separate, dedicated administration, used exclusively to close the service deficits in the Transkei - would lay the foundation for dignified functional health services across the province".

But this proposal was at odds with the National Treasury's decision, under advice from the World Bank, to avoid international borrowing to reduce the huge debt that SA had run up before 1994. "Instead of an extra half a billion rands for five years, the already inadequate health service budget was sliced further," said Thomas.

By 2013 conditions in the province have reached a new low. Budget analyst Daygan Eager points out in the Eastern Cape Health Crisis Action Coalition report that decisions on the health budget are now based on "crude assessments of absorptive capacity and historical spending, and not on any measure of what is actually needed, to deliver services".

The allocation and management of the budget may be a huge part of the problem, but even if it was increased, you would still have to contend with the provincial health department's financial mismanagement and corruption. A Special Investigations Unit probe into corruption in the Eastern Cape Health Department found that between January 2009 and June 2010, officials and their associates pocketed more than R800 million (US$80 million).

In addition, the national Auditor General's annual check of the financial statements showed that over the last decade "tens of millions of rands are lost each year through a mix of deliberate fraud, improper oversight and poorly managed supply chain systems", the report said.

Thomas believes it is possible to reverse the collapse of the province's health service, and suggests that a tiny team conduct a situational analysis of the infrastructure, supplies, equipment and staffing of all health facilities, calculate the cost of bringing those facilities up to minimum acceptable standards, and source the necessary funds.

The Minister of Health told journalists that the work of rebuilding the Eastern Cape's health department has been going on for some time. But the true indicator of progress will be the number of patients in good health when they leave well-run, properly equipped and staffed facilities.