The UN estimates that the conflict in Sudan’s Darfur region has seen some 300,000 people displaced so far in 2013 - twice as many as in 2011 and 2012, according to the UN Office for the Coordination of Humanitarian Affairs (OCHA).

“Darfur has seen a new wave of fighting in many areas in 2013. More than 300,000 people have had to flee their homes to escape violence since the beginning of the year, including over 35,000 people who have crossed the borders into Chad and the Central African Republic. The crisis is getting bigger,” Mark Cutts, OCHA head of office in Sudan, told IRIN.

The new dimension is localized clashes between Arab communities over gold-mining rights and access to grazing land.

IRIN looks at the humanitarian situation in Darfur, where an estimated 2.3 million people have been displaced by a decade of conflict and insecurity.

Cutts, however, told IRIN that the “actual numbers of IDPs [internally displaced persons] in camps are significantly higher as many of the IDPs living in smaller camps/settlements are not included in these figures and many IDPs in the bigger camps remain unregistered.”

“Road insecurity remains a major problem affecting movement of humanitarian staff and supplies in Central Darfur. The problem has been compounded by recent increased clashes between Misseriya and Salamat tribesmen in different parts of Central Darfur, as well as the reported movement of armed groups in the state,” OCHA said in a recent bulletin.

According to MSF, “61 percent of the 194 reported deaths were caused by violence, most of them (111 out of 119) by gunshots and linked to specific episodes of violence preceding the two major waves of displacements, one in early February and the other in early April.”

Nine out of 10 deaths MSF recorded during its assessment were caused by gunshot wounds. In east Darfur alone, an estimated 305 people had been killed as a result of violent clashes between the Rizeigat and Ma'alia tribes in August alone.

Peacekeepers, too, have not been spared. In July seven peacekeepers with the UN mission there were killed in an ambush - the worst in the five-year history of the UN peacekeeping operations in Sudan - bringing to 13 the number of peacekeepers killed in Darfur since October 2012.

Some 50,000 Darfur refugees have crossed into Chad. The UN Refugee Agency (UNHCR) has described it as the “largest influx of Sudanese refugees into Chad since 2005”.

Officials in Darfur have admitted that the violence is now beyond the control of the state.

“[The] state is not in control of the situation nor is it able to disperse the fighting,” Abdul Hamid Musa Kasha, governor of east Darfur, told Radio Dabanga.

The conflict in Darfur is being waged on many fronts and by different actors. It involves three main rebel groups fighting the government: the SLA(Sudan Liberation Army)-Abdul Wahid faction, the SLA-Minni Minawi faction, and the Justice and Equality Movement (JEM). And while all these rebel groups are fighting under the auspices of the Sudanese Revolutionary Front, they are also divided largely along ethnic lines, with the SLA-Abdul Wahid faction being drawn mainly from the Fur tribe, and the SLA-Minni Minawi and JEM originally being drawn many from the Zaghawa tribe. 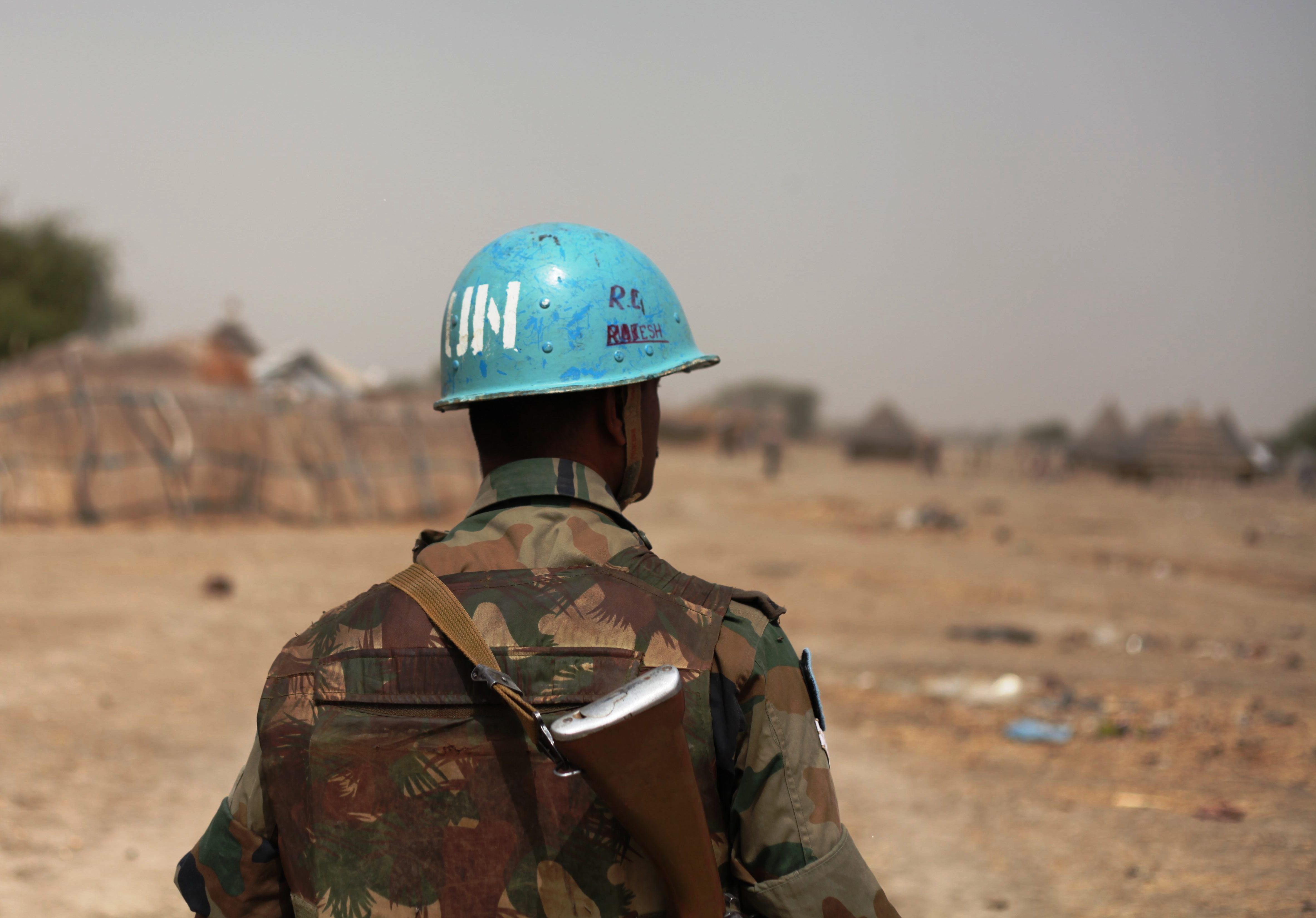 Meanwhile, there is inter-tribal violence between the Misseriya and Salamat, and another conflict between the Reizegat and Beni Hussein ethnic groups.

What is driving the conflict?

“Underpinning almost all of the conflicts in Darfur are the disputes over land ownership and land use. Indeed, much of what is commonly referred to as “inter-tribal fighting” or fighting over “economic resources” actually relates primarily to disputes over land and access to water and grazing for animals,” Cutts, told IRIN.

The recent clashes in Darfur have mostly been as a result of inter-tribal disputes over grazing land and gold-mining rights.

In January, violence broke out between the Northern Reizegat and Beni Hussein ethnic groups over control of gold mines in the Jebel Amir area of North Darfur State.

“The gold rush in Sudan is further complicating matters. At the beginning of the year there were over 60,000 migrant gold workers in North Darfur alone. In January, disputes over gold mining rights drew two Arab tribes, the Beni Hussein and the Northern Rezeigat, into a conflict that resulted in many deaths and the displacement of over 100,000 people. And this was not the first violent incident related to gold mining in Darfur,” said Cutts.

Analysts fear the competition for other resources such as gum Arabic might lead to future violent inter-communal conflicts.

In July, Human Security Baseline Assessment for Sudan (HBAS), part of the Small Arms Survey, a project of the Graduate Institute of International and Development Studies, noted: “New conflict trends have emerged in 2013. The most prominent of these, resource-based conflict in the Jebel Amir area of North Darfur over control of artisanal gold mining and trade, began in January 2013…

“Other resources have also generated inter-communal violence: in South Darfur, the Gimir and Bani Halba have clashed over the harvesting of gum Arabic,” it added.

What are the challenges facing aid agencies?

The deteriorating security situation has meant many aid agencies are unable to keep their staff on the ground in Darfur. Some have had their field offices looted.

"The gold rush in Sudan is further complicating matters. At the beginning of the year there were over 60,000 migrant gold workers in North Darfur alone"

In July an international NGO was robbed of an estimated US$40,000 when armed men entered their office in Central Darfur’s capital, Zalingei. In the same month, armed men stopped two buses and five trucks near Thur in Nertiti Locality while on their way from Zalingei to Nyala in South Darfur. The drivers and passengers were robbed of all personal items; one passenger was shot and injured while resisting the attack.

In May, two vehicles rented by an international NGO and carrying seven staff were carjacked in Wadi Salih Locality.

Earlier in February, the rented vehicle of another international NGO was ambushed north of Zalingei. Staff were robbed of all personal possessions.

“Commercial transporters are currently unwilling to transport relief supplies from El Geneina (West Darfur) and Zalingei to areas in the southern corridor localities - mainly Mukjar, Um Dukhun and Bindisi - due to security concerns,” OCHA said in its July bulletin.

Sudanese analyst Eric Reeves, a professor at the Smith College (USA), said in a recent analysis that “over the past year and more… violence has called into serious question the viability of any substantial ongoing relief efforts in the region. Virtually no international (expatriate) staff remain in Darfur, certainly not in the field or in remote locations - either for critical assessment work or to provide oversight for aid distribution. And as the recent killing of two workers for World Vision in their Nyala compound makes clear, there is no place of real safety in Darfur.”

OCHA’s Cutts told IRIN that while aid agencies have access to most of those in need in Darfur, “the continued insecurity and fighting and government restrictions on movement” had clearly affected aid agencies’ ability to operate.

“This has a direct impact on the ability of humanitarian actors to assess humanitarian needs and to ensure that people in need receive the assistance they require, particularly in areas of ongoing conflict,” he added.

In its 2013 World Report, Human Rights Watch said the Sudanese regime “continued to deny peacekeepers from the United Nations African Union Mission in Darfur (UNAMID) access to much of Darfur” and that “lawlessness and insecurity hampered the work of the peacekeepers and aid groups. Armed gunmen attacked and killed peacekeepers, including four Nigerians in October, abducted UNAMID and humanitarian staff and carjacked dozens of vehicles.”

According to Smith College’s Reeves, “opportunistic banditry has grown steadily and become a deeply debilitating threat to humanitarian operations. Fighting among Arab tribal groups has been a constant for a number of years, and has contributed steadily to instability and violence in Darfur.”

The Sudanese government too stands accused: “Khartoum has deliberately crippled UNAMID as an effective force for civilian and humanitarian protection. Opposed from the beginning by the regime, the mission cannot begin to fulfil its UN Security Council civilian protection mandate, and indeed operates only insofar as Khartoum’s security forces permit,” Reeves noted

What is the status of the peace process?

Numerous peace processes to end the conflict between the government of Sudan and the various armed groups operating in Darfur have not borne much fruit. These include one in Abuja in 2006, and another in 2007 in the Libyan capital, Tripoli. The latest such initiative was in Doha.

Signed between the Sudanese government and armed groups, they have generally been dogged by a lack of legitimacy and deemed not inclusive enough.

“The second challenge concerns poor implementation of the DDPD [Doha Document for Peace in Darfur] and a lack of inclusivity. Promised funds from both the government of Sudan and donors have been slow to arrive, which has further delayed the activities of the Darfur Regional Authority (DRA), established in December 2011 as the lead actor for the implementation of the agreement,” said the HBAS report.

“The third challenge to the formal peace process is the significant deterioration in security across Darfur in 2013, as local peace mechanisms struggle to contain inter-communal violence, exacerbated by government actions.”

Locally, state officials say they are mulling the idea of bringing together leaders of the warring tribes to cease hostilities and bring the conflict to an end.