Three years ago when Jean*, 41, applied for a license to open a hardware shop in Goma, capital of North Kivu Province in the Democratic Republic of Congo (DRC), he had to pay a fee of US$1,500 to the General Tax Directorate, and the whole process took a year.

“Every time I went to the [tax] office, they denied I ever paid the money, yet I had an official receipt from the General Tax Directorate. I had to pay a bribe to get the license,” he told IRIN.

Since opening, Jean has had to contend with different people claiming to be government officials coming regularly to his shop asking him to pay additional taxes.

“Here nothing works because all the time, people come to you saying they are from the General Tax Directorate but they have no identification at all. You just have to pay them. The tax they ask for is never uniform and depends on the mood of the person who comes to collect it,” he added.

Jean’s experience highlights the incapacity, or virtual absence, of state institutions and endemic corruption in this part of DRC.

Another example: The UN Children’s Fund (UNICEF) estimates that two thirds of children in North and South Kivu provinces do not have a birth certificate, though you have to have one (in theory at least) to be enrolled in school in the DRC.

But it is not just the lack of an effective state bureaucracy that worries some observers - many health and education services in eastern DRC are funded or controlled by aid agencies.

A March 2013 paper by Koen Vlassenroot and Karen Büscher of the Conflict Research Group argues that in Goma and elsewhere in eastern DRC, power, authority and state sovereignty have been transferred to aid organizations.

“Due to a lack of means, capacity, motivation, vision, corruption and mismanagement, state services have been constantly hollowed out and have increasingly been replaced by new coalitions of local and international development actors.”

One effect “of the humanitarian sector’s presence and interventions is the encouragement of state withdrawal from public services and a transfer of power and legitimacy to the advantage of international actors. This sector has largely taken over education and health care, and even the rehabilitation of road infrastructure,” they said.

The UN Children’s Fund (UNICEF) appealed for nearly US$6 million to fund educational activities in North and South Kivu in 2012; and $9 million for education and 2.8 million for nutrition and water, sanitation and hygiene services for the whole of DRC in 2013.

According to Büscher and Vlassenroot, international aid agencies have replaced the state in key sectors. They say development “is understood locally as a responsibility of the humanitarian sector” - meaning that citizens see development, or the lack of it, as the effort or failure of aid organizations operating in the area.

Marc-Andre Lagrange, Central Africa senior analyst at the International Crisis Group (ICG), told IRIN: “The Congolese administration based in Kinshasa has chosen governance by substitution in managing the affairs of the country’s eastern region” in which the government appears to have handed over the responsibility of providing services to aid organizations.

Women dry fish, at a market in Goma, DRC 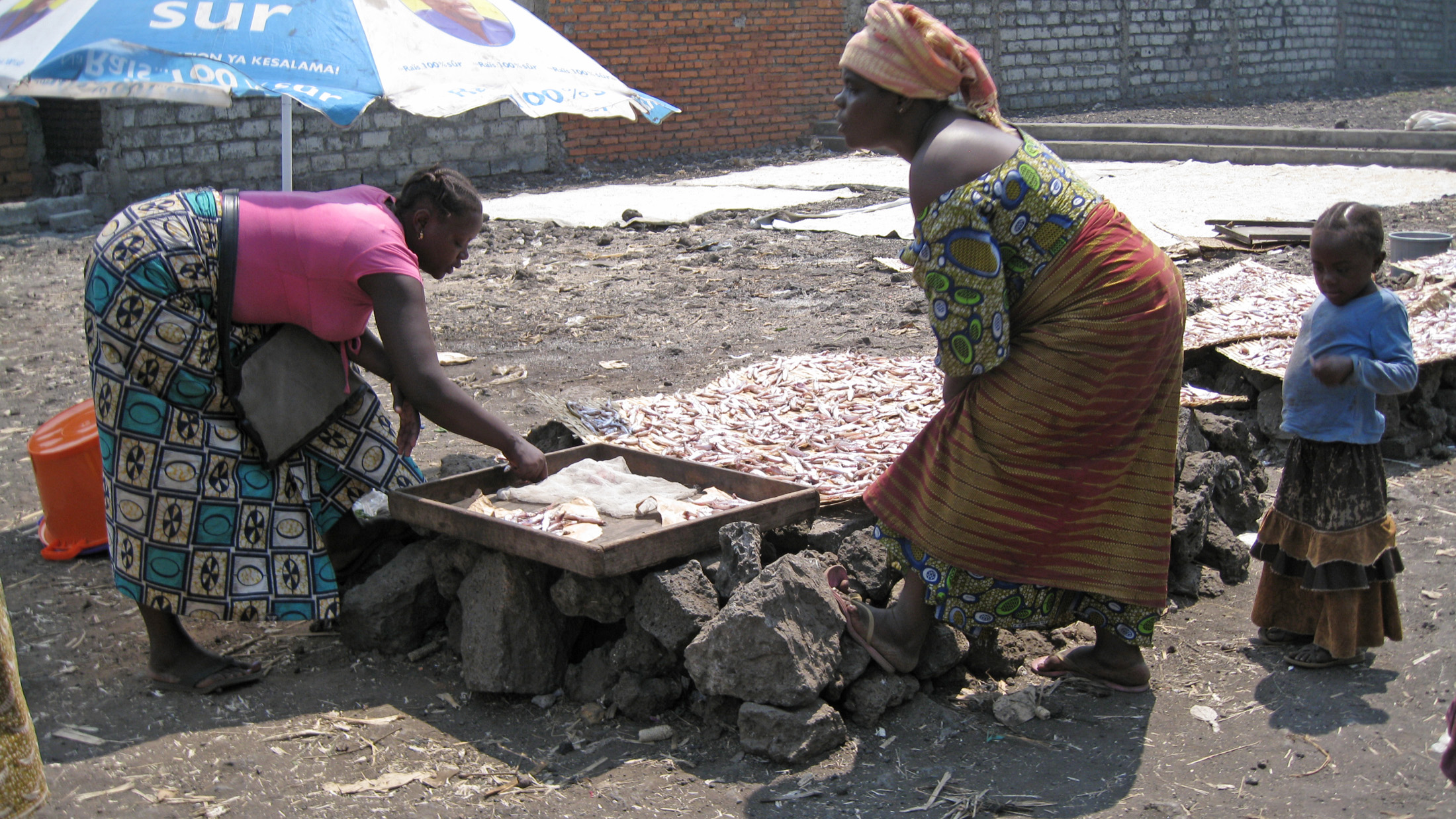 This, Lagrange argues, is not “something new in DRC as it was the Mobutu regime that introduced that practice of weakening the state apparatus and handing over social services to humanitarian and charitable organizations. Education and health care have long since been taken over by the Catholic Church in most of the country. Organizations such as MSF were present in DRC long before 1994 [and have provided health care since].”

Pacifique Borauzima Buluhukiro, a programme officer in Goma with International Alert, told IRIN: “The roads are in disrepair; electricity is irregular in town and absent in rural areas. Schools and health facilities are in poor condition and are in inaccessible areas [even] for humanitarian organizations.”

“The government doesn’t provide anything”

Those who live in camps around Goma, uprooted from their homes by armed rebel groups, say they do not receive any assistance from the government.

Nadia, a 27-year-old mother of three from Ruthshuru, told IRIN from Mugunga 3, a camp for internally displaced persons (IDPs) on the outskirts of Goma: “We have no food, water or even [security] and the government doesn’t even visit to see how we live. Only NGOs at times come here to help.”

Lack of access to clean water has made cholera and waterborne diseases endemic. The absence of government investment in the health sector has meant the few clinics, operated mostly by aid agencies, are overstretched and unable to cope.

“At times people come and we just look at them because we don’t have any way of helping them. We have no drugs. At times some organizations offer to help but it is too little and it runs out quickly. The government doesn’t provide anything,” a nurse at a government-owned health facility, told IRIN.

A Congolese human rights activist who preferred anonymity told IRIN that even though taxes are levied through the General Tax Directorate, the revenue ends up in the pockets of government officials.

"Corruption in DRC is endemic. The country has an undemocratic, authoritarian and untransparent governance system that supports patronage networks based on the exchange of favours and murky resource transfers"

“Corruption in DRC is endemic. The country has an undemocratic, authoritarian and untransparent governance system that supports patronage networks based on the exchange of favours and murky resource transfers,” Marta Martinelli, a programme officer at the Open Society Initiative for Southern Africa (OSISA), said in a recent report.

“The resources available are used to extend political patronage. In the eastern part, the conflict is a good excuse for government officials to say `when there is peace, we will come to help’,” he said.

Francois Rumuzi, a 24-year-old trader in Goma, told IRIN that seeing the poorly paid local police, who do little to protect residents from criminals, is the closest he gets to feeling the government’s presence.

Fidel Bafilemaba, a Goma-based researcher with the Enough Project, said the absence of an effective state presence has made eastern DRC the “nerve centre” of what he called DRC’s “non-state status”. He said conflict had exposed “the government’s failure in security, health and education sector reforms”. He said the situation had led many to declare the DRC “a failed state”.

Analysts have accused the government of leaving governance and development to traditional leaders in rural areas, something they say has failed because local chiefs have no constitutionally defined roles.

In a July 2013 analysis entitled Understanding Conflict in Eastern Congo (I): The Ruzizi Plain, ICG said; “The government remains ineffective in rural areas, leaving customary chiefs, whose role is recognised by the constitution but not fully defined, virtually in charge. They use their key position between the state and communities to benefit from any state and international investments and to protect their own interests. This fuels conflict, with intercommunal rivalries playing out in state institutions and among local and national politicians.”

To solve this problem, ICG said the Congolese authorities should “disseminate the laws on customary powers to the population and customary authorities, and train customary chiefs so they can assume their functions in accordance with the law.”

In its 2012 report Ending the Deadlock: Towards a new vision of peace in eastern DRC International Alert argues that for the state to have more legitimacy there needs to be better access to, and management of, land in rural areas; a more rational division and management of political power; better management of returning refugees and IDPs; and recognition of the importance of security.

According to OSISA’s Martinelli, DRC has serious flaws in its democratic system, a weak justice sector, deeply entrenched corruption and a “neglected or non-existent infrastructure, which prevents the effective delivery of public services”.