Syrian rebels facing increasing criticism for violations of international humanitarian law (IHL) and human rights law turn for guidance on the laws of war to a combination of Islamic law, IHL - where they are aware of it - and their own sense of righteousness, according to analysts and IRIN interviews with fighters.

A report late last year by the Center for Civilians in Conflict pointed to the opposition’s lack of coherent control and command structures as a roadblock to the rebels’ ability to mitigate civilian harm and enforce IHL and human rights principles throughout their ranks. As a result, with hundreds of different militias and battalions operating on the ground, each group seems to be following its own set of rules.

Faris al Bayoush, a former colonel now commanding a unit of the Free Syrian Army (FSA) in the northwestern governorate of Idlib, said he sees the regime’s blatant disregard for human rights as all the more reason to commit himself to international norms.

“The abuses were one of the main reasons the revolution started, so of course we should respect humanitarian laws.”

He told IRIN he was well-informed of the content of all relevant international agreements because the Syrian army used to hold training courses on IHL for its officers. “They don’t respect IHL, but they teach it,” he said. He tries to ensure all his men also follow the rules by briefing them before each operation. His unit’s behaviour is, however, not only regulated by IHL but also by Islamic law, or Shariah. He views the two as complementary sources.

“[Shariah] gives us more detailed instructions,” he said. “For example, the Prophet said that you are not allowed to kill an old man, harm a child or cut down a tree.”

In contrast, an increasing number of fighters within the FSA view Islamic teachings alone as providing adequate guidance, though in many cases, they do indeed overlap, especially in the treatment of women and children.

“As Muslims, we regard Shariah law as our essential source,” said Raed al Aliwi, an engineer turned FSA commander in Hama Governorate. “We don’t have to study international laws because respecting human rights comes naturally with our religion.”

He claimed that breaches are rare, but conceded that it is sometimes difficult to make all lower-level fighters respect the rules. Many of them lack even basic knowledge of international norms, codified in the four Geneva Conventions on the laws of war and their associated protocols, which add up to more than 500 articles.

“We can do anything to topple [Syrian President Bashar al-]Assad,” said Abu Bakr, an FSA fighter in the central city of Homs. He argued that there is no need for regulations because he sees the rebels’ own judgment as sufficient: In his view, since the rebels are battling a dictatorship, they necessarily have higher ethical standards.

“We can see what is true and false,” he said, “and we are on the right side.”

Al-Ansar Brigades, a jihadist group affiliated with Jabhat al-Nusra (The Front for the Support of the people of Syria), which is considered a terrorist organization by the USA, relies on a religious scholar among its commanders who provides guidelines that all the members adhere to.

“I have no idea of what the Geneva Conventions or any other treaties say,” said Abu Mousab, one of the group’s commanders, “but I’m sure Islamic law is much better because it is the most just law in the world.”

Even among the FSA fighters who stressed their commitment to IHL, there is a growing frustration with the international community and its principles.

“We are living in the days of the fighters,” said an FSA-member who goes by the name Manhal Abu Bakr in Hama. “Sometimes you cannot apply the rules when no one else does. We lost faith in international laws and policies.”

Rebel crimes have persisted despite codes signed by FSA leaders to address misconduct and lawlessness within the opposition ranks. For example, the FSA’s high command issued a “Proclamation of Principles” in July, committing to human rights, pluralism and democracy, and pledging to do their “utmost to uphold international humanitarian law and norms, including by treating prisoners humanely, even as the Assad regime engages in crimes against humanity”.

For observers like Michael Shaikh, director of country operations at the Center for Civilians in Conflict and author of the Center’s report examining how the Syrian opposition views the principles of IHL, this shows a certain desire to engage with these principles.

“The codes of conduct are initially often more for public perception than about actual battlefield behaviour, but there is a clear opening here.”

Some groups are making an effort to establish disciplinary systems.

“Many rank and file said they were reprimanded when they blew something up or fired their weapons without necessity; that weapons were taken away when there were incidents of civilian harm,” said Shaikh, who conducted interviews with rebel fighters between June and October 2012. “There was an inherent perception that they had to distinguish themselves from the Assad regime.”

Some groups have been trying to encourage rebels to follow the laws of war. According to a Westerner working with makeshift hospitals near Aleppo, one activist group tried distributing pamphlets on the laws of war, supported by verses from the Koran and the Bible, and quotes from Martin Luther King as well as Mahatma Gandhi. But it was chased away by an extremist group.

The International Committee of the Red Cross recently began arranging workshops on IHL for armed opposition groups, and is in dialogue with them with the aim of visiting places of detention under their control. It also distributes pamphlets on IHL obligations to both armed opposition groups and Syrian government soldiers it meets while in the field.

The UK is also funding a programme by two consultancy firms to train rebels using an Arabic curriculum about international humanitarian law. And the Syrian Support Group, a US-based group with a license to fundraise for the FSA in the US, says it only finances military councils that have adopted the FSA’s Proclamation of Principles.

Efforts to limit rebel abuses have also been hampered by the escalation of chaos and violence.

“The big problem in Syria is not so much extremism but lawlessness and a lack of joint leaderships and structures that can deal with these kinds of things,” said Lund, who has authored several reports on Islamist groups in Syria for the Swedish Institute for International Affairs.

As such, criminality is a bigger threat to minorities than even the most extreme Islamist groups, like the Syrian Islamic Front, which has gone out of its way to reach out to Christians (though most extremist groups take a harder line on those belonging to Assad’s Allawite sect, who are often considered apostates from Islam).

“They [extremist groups] want to protect their reputation,” Lund said. “They want to do this work for the larger purpose of defeating Assad. They realize atrocities would undermine that... Random killing is not even part of al-Qaeda’s doctrine.”

All rebels interviewed claimed they protect local residents during their operations by not targeting areas inhabited by civilians, or by telling people to vacate the area before they strike.

“We’ve even aborted operations when we realized we might hurt civilians,” said Abu Mousab of the jihadist al-Ansar Brigades.

Home made explosive at a FSA lab, Syria 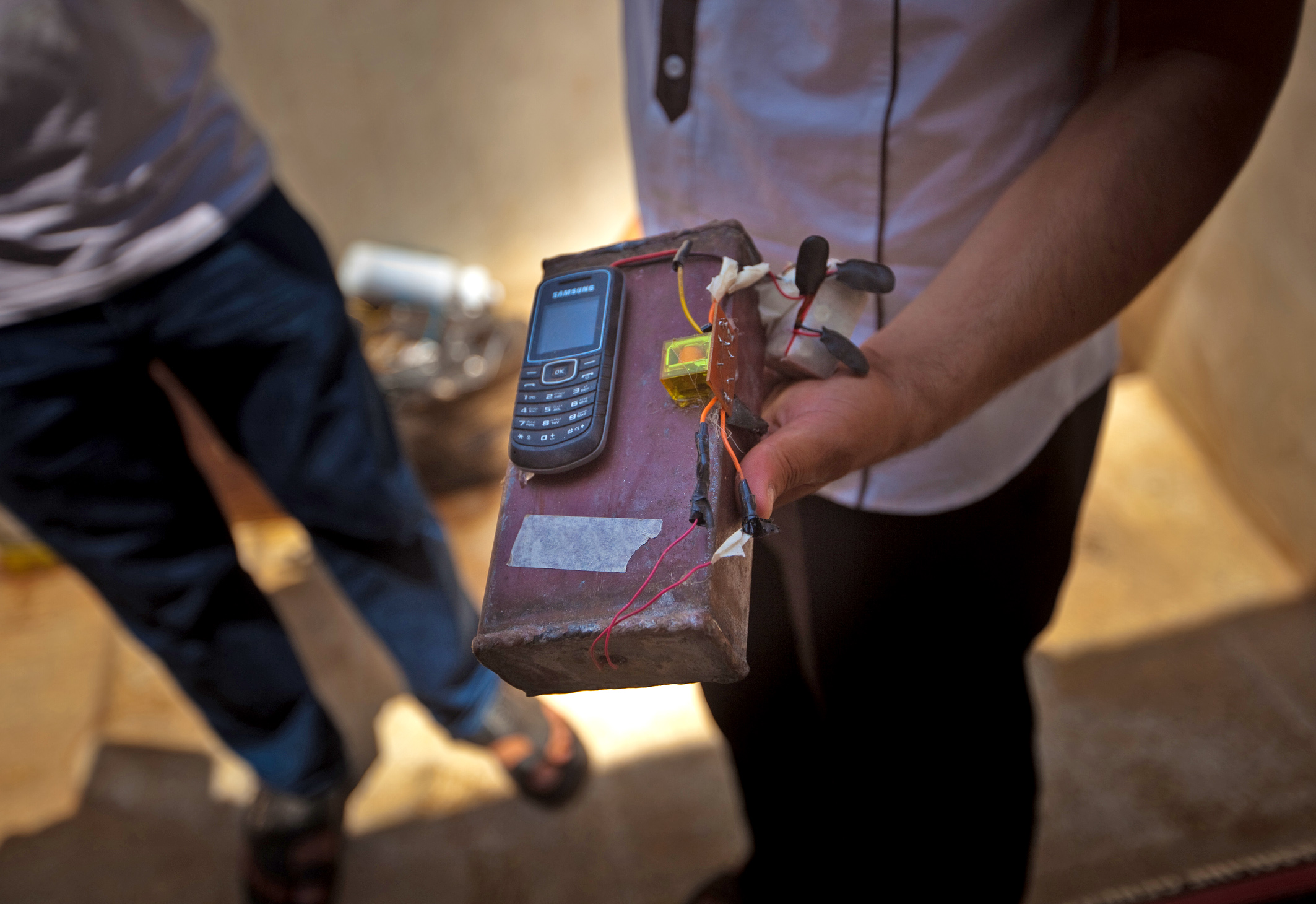 The Center for Civilians in Conflict refers to other strategies to protect civilians, such as sending out scouts before their advance, or launching ambushes at night when people are less likely to be outside.

Nevertheless, civilians have often borne the brunt of the conflict due to a lack of consideration by the rebels. For example, rebels frequently endanger the population by positioning military objectives inside residential areas. In September 2012, 10 civilians were killed when the regime forces shelled a rebel position right next to an apartment building, according to the Center.

To make matters worse, rebel groups have been increasingly employing guerrilla tactics such as suicide bombings, often resulting in heavy civilian casualties. In September, for example, a twin suicide bombing in Damascus reportedly carried out by Jabhat al-Nusra killed dozens of people.

Who is a civilian?

One of the main causes for concern is, according to experts, the absence of a clear definition of who is to be considered a civilian.

“Many rebels I spoke with see themselves as civilians who picked up arms - they don’t think the rules apply to them,” Shaikh said. At the same time, when looking at their opponents, “they had a very loosy-goosy understanding of civilians as someone without a gun,” but did not apply the term to Alawis or people they perceived to be members of the Shabiha militias supporting government forces.

Others do not think in terms of “civilian” and “combatant”, which in Shariah law are not the only determinants of whether someone is a legitimate target.

In a TV interview posted on the internet, Yusuf al-Qaradawi, traditionally considered a more moderate voice among Muslim scholars, said all collaborators working with the “unjust” Syrian government, whether civilian or combatant, should be killed, an opinion echoed by some of the fighters.

Businessmen who help fund pro-government militias “are considered like fighters” and are usually sentenced to death if found guilty of supporting the regime in one of the group’s judicial courts, said Hamza Abdulrahman, a member of the Islamist group Ahrar al-Sham in Idlib.

He, like others, admitted his brigade interrogates prisoners, using beatings - “but we don’t torture like Assad does”. Afterwards, prisoners are transferred to one of the group’s courts. Anyone found guilty of murder, kidnapping or even theft might be executed, he said. Captured soldiers from the regime’s army are also routinely killed, unless they were caught when defecting.

In spite of their growing influence, extremist groups are acting with more restraint in Syria than they did in Iraq, Lund said, “probably because they learned that when they let things go out of hand, they lose popular support and because they know the minority issue is so explosive in Syria, so they have to tread carefully.”

He warned, however, that “with time, this will probably change.”

For the full interviews with rebel fighters, click here.