Moves to bring three regions in the deep south of Somalia together into the state of Jubaland have turned into a tussle with the central government, with regional powerhouses Kenya and Ethiopia playing important roles.

After more than two decades of civil war and inter-clan conflict, Somalia is undertaking an ambitious programme of national reconciliation and development, with federalism is a pillar of its plan. The national administration, in place since 2012, is called the Somali Federal Government (SFG), and the country’s basic law is the Provisional Federal Constitution. Both embrace the principle of power-sharing between central and regional authorities.

But the so-called “Jubaland Initiative” is exposing stark disagreements over how federalism should be implemented and over who should drive the process: the central government and parliament, or the regions themselves.

The regions involved are Lower Juba, Middle Juba and Gedo, which are adjacent to Kenya and Ethiopia.

“Due to its natural resources and location, Jubaland has the potential to be one of Somalia’s richest regions, but conflict has kept it chronically unstable for over two decades,” according to the Rift Valley Institute.

The regions include some of the most remote and marginalized areas of the country, some of which are entirely cut off during the rainy season for months at a time.

The most important city is the port of Kismayo, a lucrative prize for various warlords who battled for control of it following the 1991 fall of president Mohamed Siad Barre.

Al-Shabab insurgents held Kismayo from 2006 to September 2012, when they were ousted by Kenyan troops and forces of the Ras Kamboni militia. In that time, they earned tens of millions of dollars a year in tax revenue, mainly from charcoal exports.

"Unless these tensions are managed effectively, Jubaland easily could unravel and eventually break up into areas that are controlled by smaller rival factions"

Al-Shabab still maintains a significant presence in areas outside Kismayo. Kenyan troops, who are largely integrated into the African Union’s military mission in Somalia (AMISOM) continue to be deployed in the three regions.

What is the humanitarian situation?

Like much of South and Central Somalia, Gedo, Middle Juba and Lower Juba suffered extensive infrastructural damage during the civil war. Most public buildings, such as schools and clinics, have yet to be rehabilitated. Road networks are in equally poor shape.

Aid agencies are able to access Kismayo and the city of Luuq. In January 2013, for the first time in four years, the World Food Programme (WFP) resumed operations in Kismayo, where almost half the households it surveyed were found to be food insecure, and almost a quarter of children under five malnourished. WFP has initiated a nutrition programme and provides hot meals to up to 15,000 people.

Insecurity persists, with many areas still controlled by Al-Shabab. “Even where Al-Shabab has left, the vacuum has been filled with local militias, competing warlords and rival clans,” said Mark Yarnell of Refugees International. Many NGOs are still forced to take AMISOM escorts, and negotiating with militias or insurgents is sometimes unavoidable.

This has yet to be determined. The constitution provides for the establishment of federal states, saying: “Based on a voluntary decision, two or more regions may merge to form a Federal Member State.”

But the constitution also holds that issues relating to new federal states should be sorted out by the lower house of parliament and a “national commission” that has yet to be set up.

Meanwhile, Somalia’s current regional structures are matters of great political sensitivity. Many regions exist largely as geographical entities, with little in the way of local government or administration. Somaliland, in the north, is a self-declared independent republic, and Puntland, east of Somaliland, is what the UN calls a “self-declared autonomous state” within Somalia.

What steps have been taken towards establishing Jubaland?

Current efforts to form a regional, secular administration began in 2010, some two years before the SFG came into being.

Kenya, keen to create a buffer zone to protect its territory form Al-Shabab incursions, played an important role in process, hosting talks among stakeholders and backing former defence minister Mohamed Abdi Mohamed (Gandhi) as the “president” of an entity then called “Azania”. Since the establishment of the SFG, these conversations have continued in the form of the Jubaland Initiative.

Neighbouring Ethiopia has also been keen to see a buffer zone in southern Somalia - so long as its leadership is not sympathetic to the Ogaden National Liberation Front, an Ethiopian rebel group. And the Inter-Governmental Authority on Development (IGAD), which comprises several states in the region, has also supported the Jubaland Initiative.

After Al-Shabab was pushed out of Kismayo in September 2012, discussions moved to the port city itself. In late February 2013, hundreds of delegates gathered for a formal Jubaland conference to push the process forward. A flag and three-year constitution were adopted.

Somalis load bags filled with charcoal onto a truck at a stockpile of charcoal in the Somali port city of Kismayo on March 15, 2013. Kismayo has been fought over by multiple groups for over 20 years, most recently taken from Al-Shabaab by African Union tr 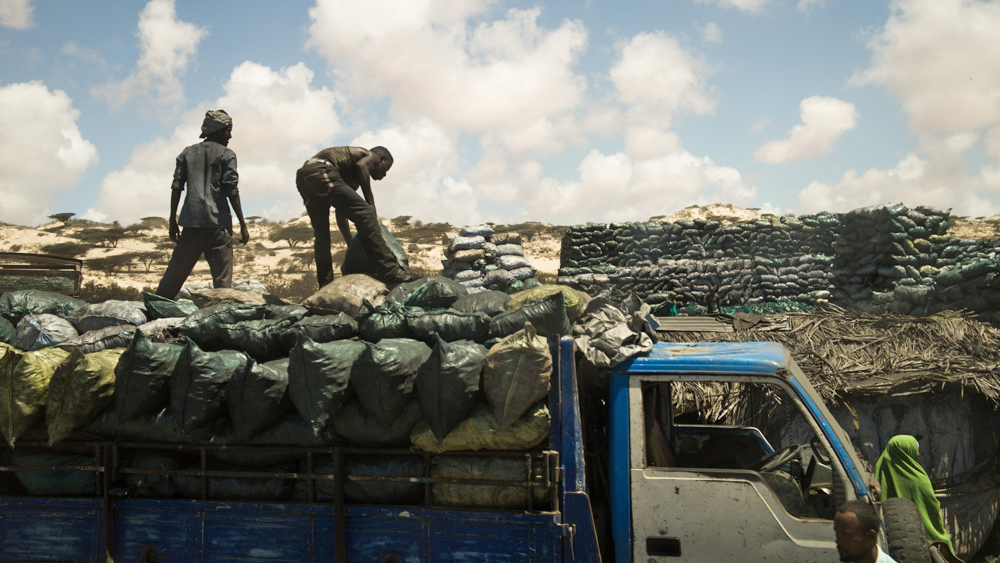 News of this development prompted a huge celebration in Kenya’s Dadaab refugee complex, which is home to almost half a million Somalis, many of whom had fled southern parts of that country over the past 20 years.

The Kismayo talks were led by Ras Kamboni leader and former Kismayo governor  Sheikh Ahmed Madobe, who is said to enjoy support from sections of both the Kenyan and Ethiopian administrations.

The Jubaland process also enjoys significant support from the leaders of Puntland, who favour a decentralized form of federalism.

Is there opposition to the initiative?

Yes. The SFG, while agreeing in principle that the three regions have the right to form a federal state, says the Jubaland Initiative in its current form violates constitutional provisions about the formation of such states.

From Mogadishu’s perspective, Jubaland is being imposed on local inhabitants by their leaders, rather than emerging from a “bottom-up” process in which local administrations are formed before deciding to merge. Mogadishu officials, as well as politicians in the Juba and Gedo regions, have expressed concern that the emerging Jubaland leadership will not be fully representative of the various clans that live there.

Prime Minister Prime Abdi Farah Shirdon recently warned that the Kismayo conference would “jeopardize the efforts of reconciliation, peace-building and state-building, create tribal divisions and also undermines the fight against extremism in the region.”

Divisions have also appeared among members of the federal parliament over whether to support the Jubaland process.

Many Somalis have long accused Kenya and Ethiopia of having a destabilizing effect on Somalia; they see Kenyan and Ethiopian involvement in the Jubaland process as a self-interested attempt to establish proxies there.

Why does this dispute matter?

This row over who should be in control of setting up new federal states threatens Somalia’s internal stability and its external relations. It places the government in Mogadishu at odds with new leaders in Kismayo and established ones in Puntland, and potentially with Ethiopia, Kenya and IGAD.

The Jubaland affair is an important test case for the fledgling SFG, whose credibility depends in part on its ability to stand up to other centres of power in the country.

“Unless these tensions are managed effectively, Jubaland easily could unravel and eventually break up into areas that are controlled by smaller rival factions. This is an opportunity that a group like Al-Shabab would love to exploit,” according to one recent analysis.

For Andrews Atta-Asamoah of the Institute for Security Studies, the row “has become a bone of contention capable of derailing the progress achieved thus far” in ridding Somalia of Al-Shabab’s influence.

Al-Shabab fighters quickly filled the gap left by the recent withdrawal of Ethiopian troops from the town Huddur, just north of Jubaland, demonstrating the group’s ability “to act swiftly when it spots weakness”, Atta-Asamoah said.

Additionally, the longer political uncertainty about Jubaland’s governance continues, the harder it is for humanitarian agencies to scale up their activities there.

There is now a “full-fledged” showdown between Mogadishu and leaders of the Jubaland Initiative, according to Michael Weinstein, professor of political science at Chicago’s Purdue University.

He pointed to the absence of a credible judicial system to resolve the constitutional row and warned that lack of clarity in the constitution itself was “an invitation to endless legal contretemps.”

There are also concerns about whether Jubaland is cohesive enough to ensure a viable state. Its constituent regions lack decent road links or any history of shared administration. “Geddo in the north links to Mogadishu, the south links to [the Kenyan town of] Garissa. But Middle and Lower Jubba roads are often impassable because of rains. There is no easy prospect of people and goods moving throughout,” said Ken Menkhaus of Davidson College.

“Whatever solution emerges,” Matt Bryden, the director of Sahan Research, told a recent seminar in Nairobi, “Jubaland is going to have to deal with the kinds of issues we’ve heard about [for years]: sharing and management of resources and the perception among various clans that there is some kind of equitable distribution.”