Since the August 2011 withdrawal of Al-Shabab insurgents from the Somali capital, Mogadishu, security has improved, allowing for the gradual resumption of government functions. But sporadic suicide attacks, conflict-related population displacement and socio-economic problems persist, exemplifying some of the daunting challenges still ahead.

On 18 March, for example, a car bomb in Mogadishu left several people dead.

Somalia’s President Hassan Sheikh Mohamud responded in a statement: “We can only presume at this stage that this cowardly attack is the work of Al-Shabab. They have been severely weakened and now resort to terrorism and murder of innocent Somali citizens… Al-Shabab/Al-Qaeda forces have no place in this world, and we will not allow them to have [a] place in Somalia.”

Al-Shabab has since claimed responsibility for the attack.

Below, IRIN provides an overview of Somalia’s recent progress and the many challenges that remain.

Recent gains by the African Union Mission in Somalia (AMISOM) and Somali forces against the Al-Shabab insurgents have given the government some breathing space. Members of the Somali diaspora are now returning due to the increased stability.

“We are no longer scared of the heavy shelling exchanged by Al-Shabab and African Union forces,” Abdullahi, a businessman in the Bakara Market, told IRIN. The market was previously an Al-Shabab stronghold.

“More children are going to school, businesses are opening, and there been a construction boom,” added another Mogadishu resident. “There has been a really big change.”

According to the mayor of Mogadishu, Mohamed Ahmed Nur Tarsan, there has been a significant improvement in the security situation there.

“When Al-Shabab was ruling parts of Mogadishu, all government MPs [members of parliament] and politicians could not rent houses but were all caged in the presidential palace. Now, they live in various neighbourhoods of Mogadishu,” he said.

The lighting up of two arterial roads in Mogadishu has allowed businesses there to remain open after dark; children can also be seen playing in the streets. “I am playing football with my friends until late at night,” Mohamed Hassan, 12, told IRIN in the Mogadishu district of Howlwadag.

There are plans to gradually light up other major roads in Mogadishu in a bid to boost business.

What are the remaining security threats?

But “insecurity remained a key challenge throughout the country in February,” according to an update by the UN Office for the Coordination of Humanitarian Affairs (OCHA), issued on 6 March.

“An explosion occurred in Mogadishu's Abdiaziz District. The vehicle-borne improvized explosive device [VBIED] attack was carried out by a suicide bomber. One person was confirmed dead and three others were injured.

"When Al-Shabab was ruling parts of Mogadishu, all government MPs and politicians could not rent houses but were all caged in the presidential palace. Now, they live in various neighbourhoods of Mogadishu"

“In Kismayo, 11 people were killed in clashes between rival pro-government and clan-based militias. The clashes may be related to the long political tension in the Juba region over the formation of a regional state,” the update said, adding that a suicide attack on 11 February in Gaalkayo had killed one person and wounded 27 others.

Dozens of households also fled areas in the Bay and Bakool regions to the town of Luuq, and others fled to Dollo Ado refugee camp in Ethiopia, fearing armed clashes in Diinsoor and the onset of the lean season, it said.

Meanwhile, an Al-Shabab blockade in Bakool has led to a rise in the cost of basic foodstuffs.

Mohamed Moalin, the commissioner of Bakool’s regional capital of Hudur, said that Al-Shabab is preventing food from reaching the town.

“Al-Shabab controls the main roads that lead to Hudur, and they would not allow vehicles carrying food to enter the [areas] we control, and this has resulted [in] hardships for the people.” Residents there now rely on food brought in by donkey carts.

In a 21 March press release, following the withdrawal of Ethiopian troops from Hudur, AMISOM sought to reassure residents, stating it “is working closely with the Federal Government of Somalia in their efforts to re-establish a security presence in the area.”

AMISOM Force Commander General Gutti said, “We have in place contingent measures to ensure that areas in Bay and Bakool remain stable and secure in the event of further Ethiopian troop withdrawals.”

The Somali government is also grappling with acts of criminality by its armed forces.

Several hours after the execution of three soldiers for killing civilians, the chairman of Somalia’s Supreme Military Court, Hassan Mohamed Hussein Mungab, told IRIN: “We will not tolerate killers and rapists within the armed forces. We will kill them because they denied the very people they were supposed to protect the right to life.”

Armed, uniformed men have also been accused of robbery. “I have had my mobile phone forcibly taken by two uniformed men,” Abdikafi Mohamed, a resident of Mogadishu, said.

International focus on the security sector was reflected in the March partial lifting of a UN arms embargo on Somalia, which will  allow the government to continue to train and equip its armed forces.

How have development efforts fared?

The Somalia government also struggles to ensure access to health and education.

The lack of experienced health professionals and supplies is a challenge, said Mohamud Moallim Yahye, the deputy minister for development and social services.

A child and her caretaker at the hospital. Marka General Hospital, Somalia 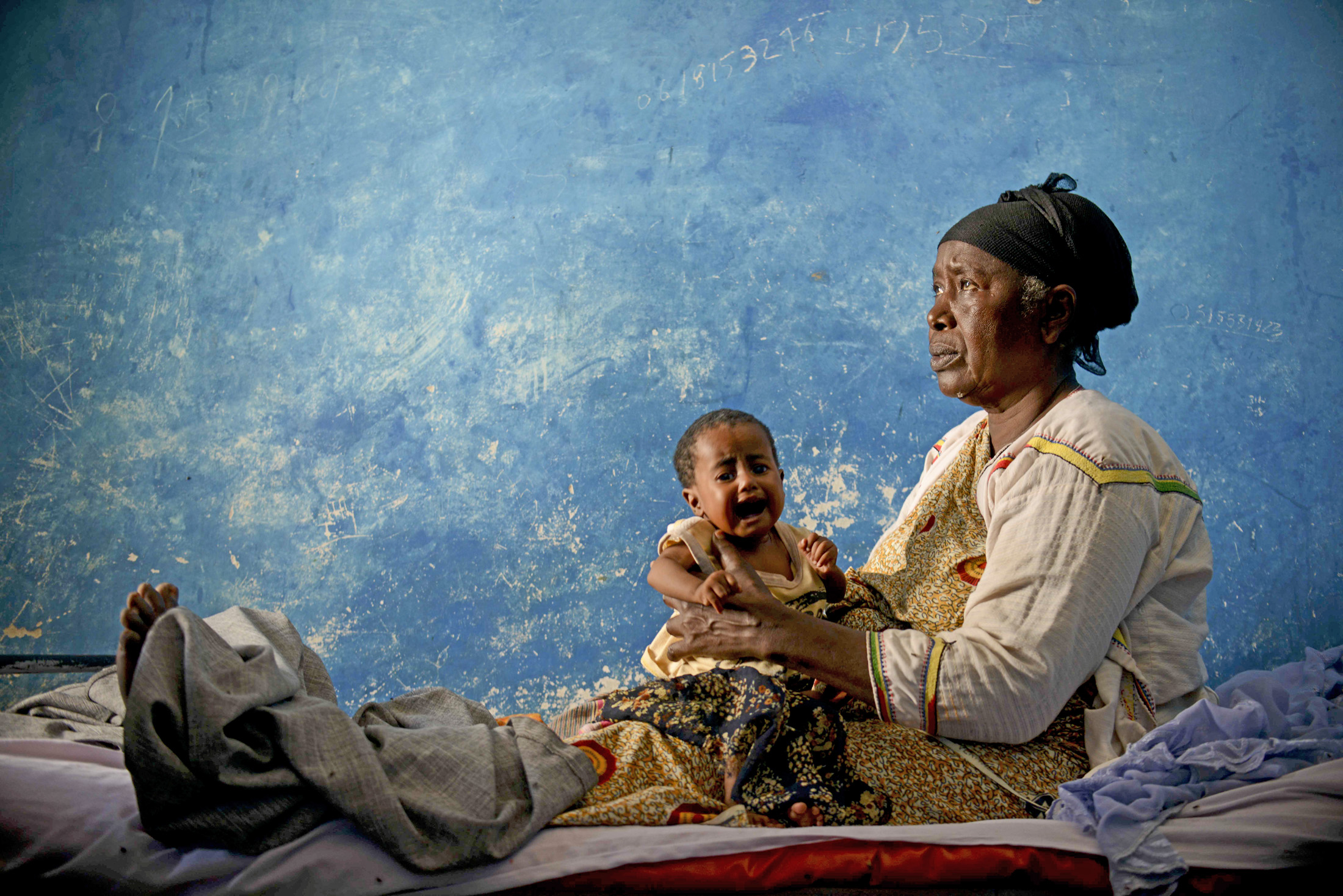 “Most of our doctors are junior and they do not have access to the right equipment to carry out their work. With the help of our Turkish brothers [through Turkish NGOs], we want to rebuild the country’s health institutions and gradually get free public hospitals,” Yahye told IRIN, adding that the ministry hopes to engage more with development partners.

“Donors and aid organizations used to engage with local NGO and private individuals while providing services, but now things are changing - health interventions across the country will be conducted through the Ministry of Social Services [and] Development.”

An estimated four million Somali children are also missing out on schooling, according to the social services ministry. The ministry hopes to send at least one million children to school in 2013, even as former government schools are currently housing hundreds of internally displaced persons.

A standard syllabus must also be developed. “There are various syllabuses in use in the country which impart different cultures and values among Somalis, so developing a standard curriculum is a challenge,” said Yahye.

Has peace affected the economy?

Financial issues remain paramount. The Somali shilling has been strengthening against the US dollar over the last couple of months, with adverse effects.

At present, $100 is being exchanged for 1.7 million Somali shillings, compared to 2.2 million in the recent past.

“My brother in Britain sends me $100, but it buys less shillings than before, which means I can buy less goods or services. It’s good to have our money strengthened, but it does not have increased purchasing power,” said Liban Galad, a student in Mogadishu.

“We used to eat three times a day, but we have reduced [this to] two,” Fatima Rashid, a mother of five, told IRIN.

Somalia does not have a functioning central bank to regulate the supply and demand of currencies.

“For the last two decades, no legal sufficient money has been printed, so there [are] less shillings in Somalia, and the rise in demand for the shilling has devalued the dollar,” Mohamed Sheikh Ahmed, an economics lecturer at the SIMAD University, told IRIN.

Some business people could also be hoarding Somali shillings leading to a higher demand.

To help to stabilize the fluctuating exchange rate, Ahmed suggests printing more 1,000 shilling notes, but says longer-term measures are needed. “The most practical [solution] in the long term is the printing of new money with [a] strong central bank, which can control the demand and the supply [of currency],” he said, adding that the government should also start paying salaries and collecting taxes in Somali shillings.